Or, you could download this app which alerts drivers to slow down and/or stop as you approach an intersection allowing you to cross the street safely.

"Viziblezone has introduced a patent-protected, cutting-edge vehicle integrated “Pedestrian Detector.” The system identifies, tracks and protects pedestrians, even when they go undetected by a fast-approaching driver. The detector is designed to operate in any adverse weather and visibility, whether day or night."

VZ's app could give anyone that that leases their software the ability to know where a person or vehicle is in real-time.

TechCrunch say's "VZ transforms smartphones into smart beacons that cars can see and then avoid.”

And who doesn't want to turn themselves or their vehicles into real-time smart beacons?

Fast Company warns that VZ wants their product embedded in every new phone and car.

"The company’s vision isn’t to offer an app, but to donate the software to phone manufacturers to embed in their firmware so it’s available to everyone. Car manufacturers will pay to install the corresponding software in the operating system in cars."

Imagine giving phone companies and auto manufacturers the ability to know where everyone is and where every vehicle is in real-time? Can you imagine how valuable that (smart beacon) information could be?

Phone companies and auto manufacturers will use VZ, Bluetooth, your vehicle's infotainment center and services like EZPass, Onstar or SiriusXM to create a dystopian real-time tracking program. (Click on the links to see how they track you.)

A Fast Company article from 2018 warns that Honda is also piloting smart intersection cameras to track everyone's location in real-time. 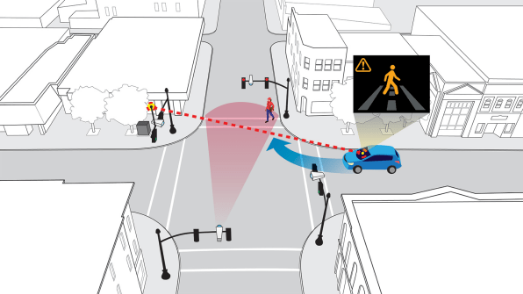 "The new system, designed by Honda, uses four cameras mounted around the intersection and Honda’s object-recognition software, which can identify anyone or anything approaching the intersection–from a cyclist or an ambulance to a stray dog. If a crash is possible, the system beams an immediate warning to a device inside the cars that are taking place in the pilot."

What Mr. Raines really means, is by turning pedestrian's mobile phones into smart beacons, the tons of data VZ collects on an individual is a "comprehensive $olution" which can be sold to governments and data miners.

VZ's "Technology" page hints that the company will be able to predict where an individual will be in the future.

"The VZ behavior prediction model factors in individual profiles of pedestrians and drivers, as well as the attributes of the physical surroundings."

VentureBeat's article warns that VZ "draws data from a pool of hundreds of thousands of people" and its "AI algorithms builds behavioral profiles" on everyone.

VZ joins a long list of smart city devices masquerading as public safety devices that will ultimately profit Big Brother and private corporations at the expense of our privacy.