Mojo Vision's prototypes can enhance your vision or show you your schedule—right from the surface of your eyes.

A glance to the left. A flick to the right. As my eyes flitted around the room, I moved through a virtual interface only visible to me—scrolling through a calendar, looking up commute times home, and even controlling music playback. It's all I theoretically need to do to use Mojo Lens, a smart contact lens coming from a company called Mojo Vision.

The California-based company, which has been quiet about what it's been working on for five years, has finally shared its plan for the world's "first true smart contact lens." But let's be clear: This is not a product you'll see on store shelves next autumn. It's in the research and development phase—a few years away from becoming a real product. In fact, the demos I tried did not even involve me plopping on a contact lens—they used virtual reality headsets and held up bulky prototypes to my eye, as though I was Sherlock Holmes with a magnifying glass.

A Future with Less Screens

Mojo Vision is all about "invisible computing." The company, whose founders include industry veterans from the likes of Apple, Google, Amazon, and Microsoft, wants to reduce our reliance on screens. Instead of pulling out your phone to check why it buzzed in the middle of a conversation, look to the corner of your eye to activate an interface that will tell you in a split second.

"We want to create a technology that lets you be you, lets you look like you; doesn't change your appearance; it doesn't make you act weird walking down the street," said Mike Wiemer, cofounder and chief technology officer at Mojo Vision. "It's very discreet and frankly, substantially, most of the time it doesn't show you anything."

Making smart contact lenses is no simple task, though—even Alphabet's Verily subsidiary had to refocus its Smart Lens program after hitting a few snags. You need to have the right sensors at the right sizes, the power to make it all work, and a display and image sensor, too. These sensors range from custom wireless radios to motion sensors for eye tracking and image stabilization. 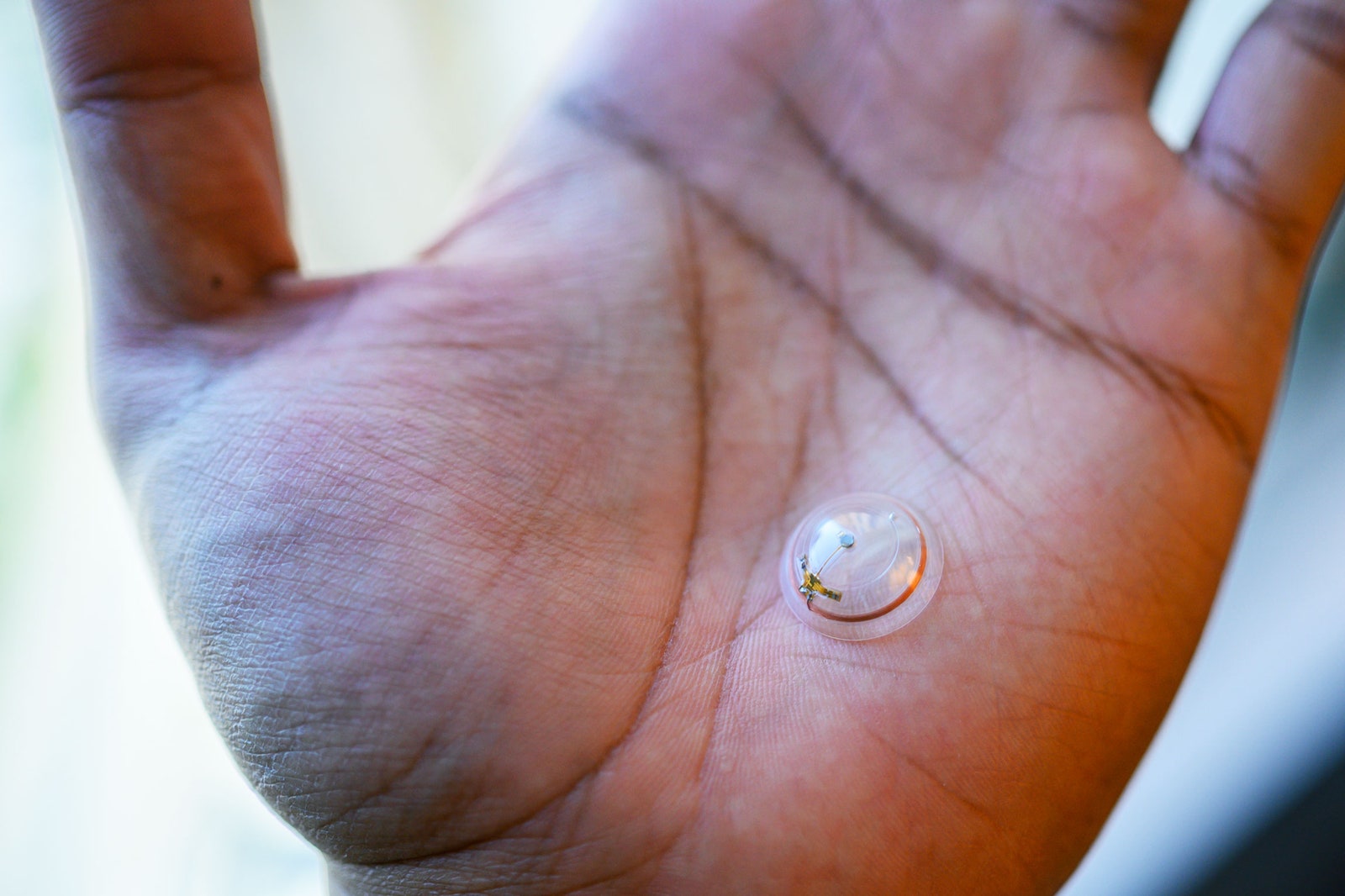 The folks at Mojo Vision showed me prototype contact lenses with an embedded display—the screen was, amazingly, about the size of a dot from an ink pen. They say it's the "smallest, densest display ever made," but they didn't have a version with all the sensors inside yet. I looked through the prototype, and as expected I saw text hovering over the real world. It's not dissimilar from my experience using augmented reality eyewear like Google Glass or Focals, the smart eyeglasses from North—except Focals projects its interface to the glasses, whereas Mojo Vision's contacts have the display integrated into the contact lens.

At the moment, the lens receives power via a wearable you wear on your wrist, which also handles much of the computing. Eventually, Wiemer said, he thinks the team might drop the wearable in favor of a smartphone-based solution.

Nevertheless, the possibilities are wide-reaching. I donned an HTC Vive Pro virtual reality headset outfitted with eye-tracking technology to get an early experience of what wearing Mojo Lens will be like.

If you're looking straight ahead while wearing the lens, you won't see anything visually disrupting. But peek to a corner in any direction and you'll see icons pop up, ranging from a calendar, weather, notifications, music playback, and more. Stare at the arrow next to these icons to expand them even further to see more details—like a three-day forecast, for example—or all your calendar events for the day. It took me about a minute to figure out how to navigate the interface; it could all change at any moment, but it's promising to see just how simple it is to use.

One of my favorite demo apps is Speech. Using only my eyes, I opened a prewritten speech, scrolled through it, and read it aloud. This app alone opens up a myriad of possibilities. Imagine sitting in a taped interview but, instead of looking at notes, you can pull up your next question with a flick of your eye without having to look down. Or if you're filming a video, you may not need to shoot multiple takes because the script is in the dead center of your eye. Who needs teleprompters?

To those around you, it can be obvious when you're using the contact lens. To pull up the interface you need to look at the corner of your eye—something that's noticeable when someone is staring at you straight on, but it's far more invisible than taking out your phone, or checking your watch. Alerts and notifications will also pop up sparingly, though I expect there'd be a way to control all of that down the road.

The lens will sit right on the cornea, and Ashley Tuan, vice president of medical devices at Mojo Vision, tells me it will be just like wearing normal contacts. The team calculated the lumens projection on the retina and found that everything is "way under the regulation," in terms of safety standards.

"It's a new form factor, but you as the wearer of this product, you just see content," Wiemer assured me. "Just as you would see content if you held up a mobile phone or you put on a pair of glasses that made that content appear in the world—from the perspective of your body and your retina—it's just light on your retina, just like light on your retina right now. The safety implications of this are something that we obviously paid a lot of attention to, but it's a very safe product."

Mojo Vision is positioning its contact lens for consumers and businesses, but first it's focusing on people who are visually impaired or have low vision—or vision poor enough that glasses cannot fix it. That's because all contact lenses, smart or dumb, need to clear the Food and Drug Administration (FDA) in the US. Mojo Vision has been granted the Breakthrough Device Designation, which allows companies to fast-track development, assessment, and review for products that could help people with life-threatening or debilitating conditions—though the FDA maintains it preserves "the statutory standards for premarket approval."

To show off the capabilities of helping people with low vision, the team threw me into a dark hotel room filled with stop signs and various other items. I was handed a stick with a prototype Mojo Lens and held it close to my eye. This one had an image sensor connected to it. Despite standing in almost pitch darkness, I could make out people in the room and the edges of the bed, and I could even read the stop sign with ease. It was almost like using night vision. The image sensor showed me the real world, but the lens increased the contrast, highlighted edges, magnified objects, and performed a few other tricks to help me see in the dark. Ideally, it will help visually impaired users navigate their surroundings a lot easier. It was impressive.

Mojo Vision is partnering with the Vista Center for the Blind and Visually Impaired in Palo Alto, California, to connect with the nonprofit's clients and get input for the lenses during development. The company will also work with FDA experts to meet safety regulations.

If you don't suffer from low vision, have a seat. If it takes a few years to get clearance on a device that works for the visually impaired, it will take a few more to make a smart contact lens for everyone else.