The Arkansas-based firm is using robots to fulfill grocery orders in one of its Supercenters and is set to add shelf-scanning machines to 650 additional stores by the end of the summer.

The shift is aimed at reducing costs, improving store performance and gaining credibility in its battle against to reign supreme as the king of retail.

Walmart announced it would soon incorporate automated robotic carts, called Alphabots, in one of its superstores in Salem, New Hampshire in 2018.

The system has now been implemented inside a 20,000-square-foot warehouse-style space.

Once products have been retrieved, Alphabot takes them to a workstation where a human employee will then check the order, bag it and send it out for delivery.

People will also be tasked with picking produce and other fresh products by hand, but Alphabot is said to 'help make the retrieval process for all other items easier and faster.' 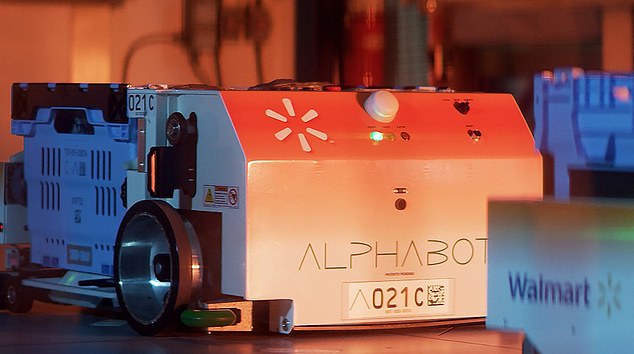 Brian Roth is a senior manager of pickup automation and digital operations for Walmart US, said: 'By assembling and delivering orders to associates, Alphabot is streamlining the order process, allowing associates to do their jobs with greater speed and efficiency.'

'Ultimately, this will lower dispense times, increase accuracy and improve the entirety of online grocery.'

'And it will help free associates to focus on service and selling, while the technology handles the more mundane, repeatable tasks.'

The system's fully autonomous bots operate on three axes of motion, constituting a more flexible system than is typically found in traditional fulfillment centers and warehouses.

Because the carts that carry items move both horizontally and vertically without any lifts or conveyors, there are fewer space constraints to consider, which should make adoption of the system easier across stores.

The robots are constantly gathering data about products, which allows Walmart to understand the needs of its customers and design new protocols to improve delivery experience.

'We never want to be in a position to tell an online grocery customer they can't have an item,' Roth said.

'We'll be able to look at datasets and fairly say 'these two brands of pasta are typically bought together,' or 'here's an item a consumer buys often,' and use that information to make more informed substitutions.'

The company is also using new technologies in other locations across the country and is set to add shelf-scanning robots to 650 more US stores by the end of the summer –bringing the total up to 1,000, Bloomberg reported.

The robots, called Bossa Nova, are six feet tall and roam the aisles looking for empty shelves or problems.

Walmart says the shelf-scanners can reduce tasks that once took as long as two weeks into a twice-daily routine.