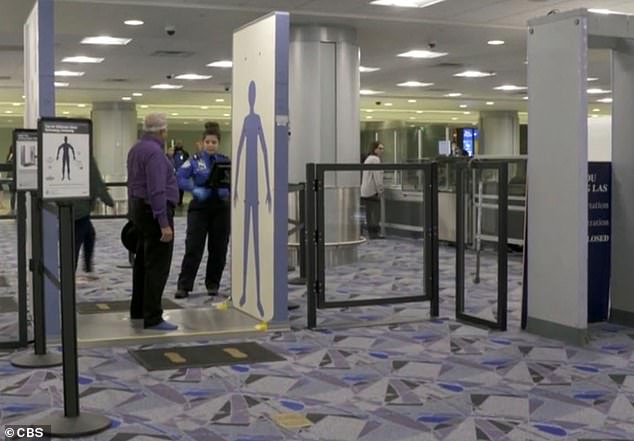 With nearly 27 million people set to travel on a plane this holiday season, the Transportation Security Administration warned flyers to expect long lines at check-in.

However, researchers are testing new technology it is calling ‘Innovation Checkpoint’ to deal with complaints over electronics, liquids and taking off their shoes.

The process would use a sensor on a drone to detect homemade bombs, a gel that surrounds an explosive so it can safely be removed and scanners capable of investigating items in a suitcase, so nothing needs to be removed.

Jose Bonilla, the director of TSA's Innovation Task Force told CBSNews: ‘This is a glimpse into the future of what aviation security is going to look like.’

‘What we’re trying to do is, how do we make that a more seamless process for the traveling public, but not giving upon security

Researchers at the University of Rhode Island is working on ways to make it easier for both the Transportation Security Administration (TSA) and travelers this year.

These scientists have partnered with the Department of Homeland Security in the design of a sensory called a ‘digital dog nose’, which will be paired with a drone and is said to detect explosives better than a bomb-sniffing dog.

The sensory is still in the early development stages, but will be the size of a smartphone once it is completed.

The team has also designed a gel they called ‘Schmoo’, which the TSA can place around explosives or hazardous chemicals to safely remove them from the airport.

And the final piece of this series includes a new way to scan suitcases, without travelers having to remove any items.

When flyers move towards the checkpoint, they will be met with a few message boards.

They then scan their license in the new ID readers to validate their identify and confirm their itinerary - without the need of showing a boarding pass.

From there, carry-on bags go to a CT scanner, which electronics can stay in, and eventually the goal is liquids will, too.

The new scanners can more easily see through all the clutter in bags.

The team has also designed a gel they called ‘Schmoo’, which the TSA can place around explosives or hazardous chemicals to safely remove them from the airport