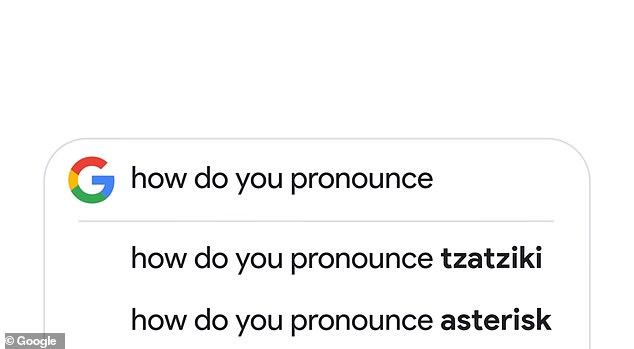 Google is rolling out a new feature that lets users check their pronunciation using artificial intelligence.

The tool, which launched today, is accessible to users upon searching Google for correct word pronunciations and leverages the microphone on one's device.

Users are prompted to speak the word into their mic and then Google's AI will analyze the snippet and compare it against the word's correct pronunciation.

'For example, if you’re practicing how to say “asterisk,” the speech recognition technology analyzes how you said the word and then, it recognizes that the last soundbite was pronounced ‘rict’ instead of ‘uhsk,’ Google said in a statement.

'Based on this, you will receive feedback on how you can improve next time.'

For now, Google says the feature is purely 'experimental' and is only available to mobile users, but it already has plans to expand its capabilities in the future to include Spanish pronunciations.

According to Google, the feature will not only help users pronounce words, but will help them retain the information they learn in the process.

'Studies have shown that practicing how to say a word can be helpful for remembering it, especially when you’re learning a new language. Previously, when you searched for things like “how to pronounce quokka,” you could play audio and hear the word,' Google writes in a blog post.

'With the new pronunciation feature, you’ll be able to also practice saying “quokka” into your phone’s microphone and receive feedback on what, if anything, can be adjusted in your pronunciation.'

In addition to its AI powered pronunciation aid, the company is also rolling out visual prompts that go along with definitions.

For instance, if you search avocado, the definition will come along with image of what one looks like.

WHAT IS DEEP LEARNING?

Deep learning is a form of machine learning concerned with algorithms which have a wide range of applications.

It is a field which was inspired by the human brain and focuses on building artificial neural networks.

It was formed originally based on brain simulations and to allow learning algorithms to become better and easier to use.

Processing vast amounts of complex data then becomes much easier and allows researchers to trust algorithms to draw accurate conclusions based on the parameters the researchers have set.

Task-specific algorithms which exist are better for specific tasks and goals but deep-learning allows for a wider scope of data collection.