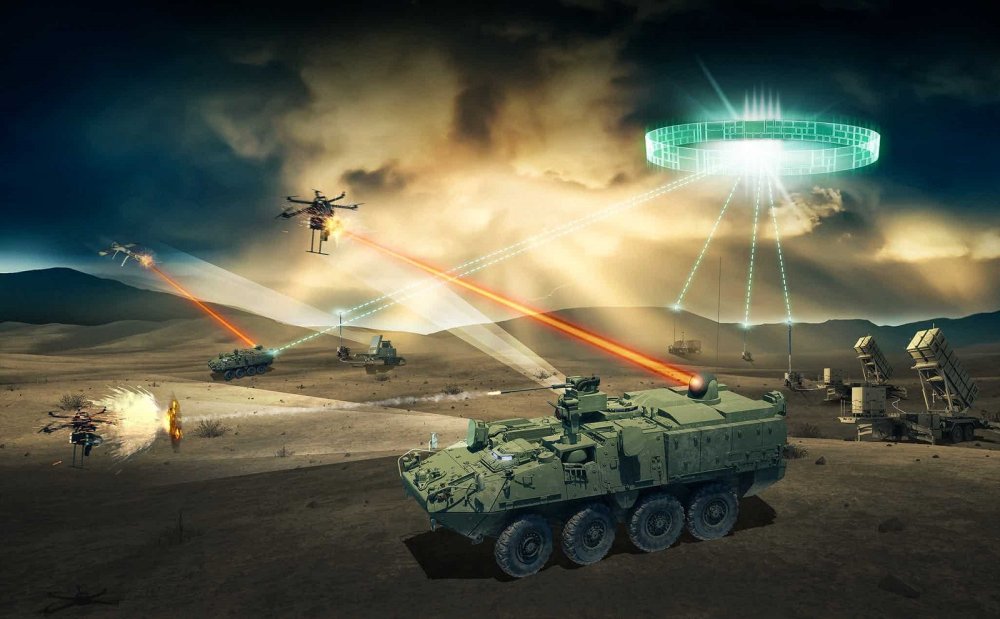 The Army is preparing to incinerate enemy weapons “targets” in an upcoming in a “laser-off” firing of its emerging Stryker-armed 50-kilowatt laser weapon designed to destroy drones, helicopters, fixed-wing aircraft and incoming enemy missiles.

(Washington, D.C.) The Army is preparing to incinerate enemy weapons “targets” in an upcoming in a “laser-off” firing of its emerging Stryker-armed 50-kilowatt laser weapon designed to destroy drones, helicopters, fixed-wing aircraft and incoming enemy missiles.

The Stryker-fired laser, in development for several years, is part of the Army’s fast-developing Initial Maneuver Short Range Air Defense (IM-SHORAD) program designed to bring air-and-missile defense back to armored vehicles on the move in combat.

The program will deliver 50 kilowatt (kW)-class lasers on a platoon of four Stryker vehicles in Fiscal Year 2022, an Army report stated.

"The time is now to get directed energy weapons to the battlefield," Lt. Gen. Neil Thurgood, Director of Hypersonics, Directed Energy, Space and Rapid Acquisition, said in an Army report. "The Army recognizes the need for directed energy lasers as part of the Army's modernization plan. This is no longer a research effort or a demonstration effort. It is a strategic combat capability, and we are on the right path to get it in Soldiers' hands.

Northrop Grumman and Raytheon, are subcontractors in an Other Transaction Authority (OTA) agreement between the Army and Kord Technologies, an Army report stated.

The Army is setting an ambitious time-table for deploying laser weapons on Strykers, an approach that is indicative of a broad Army push to better expedite weapons delivery. The service expects to have operational lasers ready to deploy on Strykers by 2022, if not earlier. The strategy is to harvest and deliver mature weapons systems on an accelerated time frame while of course preserving the steps and key procedures necessary for successful deployment. This strategy is, not surprisingly, driven by the current threat scenario.

“It is all about the ability to put photons on target. It is a system that can be deployed rapidly from a stowed position. It can engage an enemy at the speed of light. It has to be able to shoot from a moving platform and engage a moving target through an air column that can be full of rain, dust or turbulence -- and hold that energy on target long enough to get the desired effect,” Mark Skinner, Vice President of Directed Energy, Northrop Grumman, told Warrior.

Skinner mentioned weather obscurants as part of the much discussed “beam attenuation” challenge when it comes to laser weapons. Not only do lasers require substantial amounts of transportable electrical power but are also at times limited by certain adverse weather conditions. With this in mind, industry developers such as Northrop are exploring innovations designed to increase the range, functionality, power and durability of lasers to enable more attack options.

“We are on track to deliver a laser next year and support the Army’s effort to build a platoon of laser-combat-capable Strykers,” Skinner said.

Speaking to the Army’s current weapons development strategy, Army Vice Chief of Staff Gen. Joseph Martin says Army modernization priorities, which of course include the SHORAD program, are on track, moving quickly and in need of consistent funding to move forward quickly. Martin’s strategic view corresponds to the Army’s current OTA-enabled expedited schedule to conduct the shoot-off in 2021 and then deploy the lasers in 2022. Naturally, funding will be necessary to sustain this time-schedule. Vendors involved in the program are of course partnering with Stryker-maker General Dynamics Land Systems.

“All the modernization priorities are doing very well. We’re seeing the progress that we need to right now. We’ve got a lot of work to do. We need to continue to have consistent funding; without consistent funding, requirements can be requirements, but they’ll never turn into material that we develop,” Martin told Warrior in an interview.​

Funding questions are receiving additional focus, given that Congress is now finalizing its 2020 defense spending legislation in conference.

While Martin did not specifically address the Stryker-laser program, he did talk about the current emphasis upon precision fires, accelerated modernization, new armored vehicle strategies and, perhaps of greatest significance, how emerging weapons and technologies are changing Army tactics to enable a doctrinal shift to multi-domain operations.

“We’re modernizing the Army and changing our doctrine to multi-domain operations, and we’re taking a hard look at how we’re organized across the Army to make sure that we’re appropriately structured for, equipped with and trained to succeed and dominate in that environment,” Martin told Warrior.

Adding new precision air-defense firepower to Strykers does further enable multi-domain operations, as it gives a fast-moving Stryker unit the ability to engage and take out air-threats while on the move. This aligns with large amounts of current Pentagon work, including major Army efforts, to stand up multi-domain task-force units for testing, experimentation and rapid development.

By being able to engage enemy drones, helicopters and even some fixed-wing enemy targets, air-defense lasers greatly improve air-ground tactical attack. Also, perhaps of even greater significance, Stryker-fire lasers could intercept incoming enemy air-missile attacks. As part of this mission, they do have some characteristics which could be described as stealthy. Unlike the explosive effect of firing a kinetic weapon such as a Stinger or Hellfire, a laser is quiet. It does of course give off a light signature, but that is potentially much less detectable than the sound of a missile firing, thus enabling a Stryker to avoid giving up its position.

Lasers can also function as optical sensors able to identify or paint targets for other weapons. This kind of technology also contributes to multi-domain operations because, as platforms increasingly become more networked, air platforms such as drones and surveillance planes will be able to more quickly share targeting information which ground combat assets such as Strykers; this quickens the sensor-to-shooter kill chain and gives attacking forces a better opportunity to get ahead of an enemies’ decision cycle. It further enables tactical combat maneuver as ground attack vehicles can better interoperate with air attack, cueing drones on attack targets or receiving combat-relevant ISR in real time -- with much less latency.

Army Strykers armed with lasers and other air-defense weapons are changing the Army to rethink its armored vehicle formations and rapidly integrate methods of incorporated unmanned systems -- ground and air drones -- into armored vehicle maneuver. The presence of new weapons of this kind might enable mobile units to hit enemies faster, add precision, and in some cases lower collateral damage. In a heavily populated urban area, for instance, firing a missile interceptor might cause a larger, more dangerous explosion; firing a laser which slowly burns a hole through the metal of an enemy air target can decrease fragmentation and tailor the timing of when an enemy asset is ultimately disabled. As part of this attack envelope, lasers are scalable. Several beams can be merged for a stronger impact, and its strength can be adjusted, enabling attackers with a range of options to include destroying or merely disabling a target. So while the initial weapon is slated as 50kw, the power will likely go up as technology allows.

Lasers also bring the substantial advantage of staying ahead of the “cost curve,” making them easier to use repeatedly. In many instances, low-cost lasers could destroy targets instead of expensive interceptor missiles.

Furthermore, mobile-power technology, targeting algorithms, beam control and thermal management technologies are all progressing quickly, a scenario which increases prospects for improved laser applications in coming years. Fire-control oriented computer algorithms could quickly merge sensor data with targeting information and tactical details to give Strykers an ability to find and hit targets much more efficiently, and potentially at farther ranges.

As for the laser shoot-off, the Army is naturally at times limited when it comes to offering details about ongoing competitions. However, the service did describe the Stryker-laser plan as slated to “complete a competitive performance checkout leading into a range demonstration against various threats.”