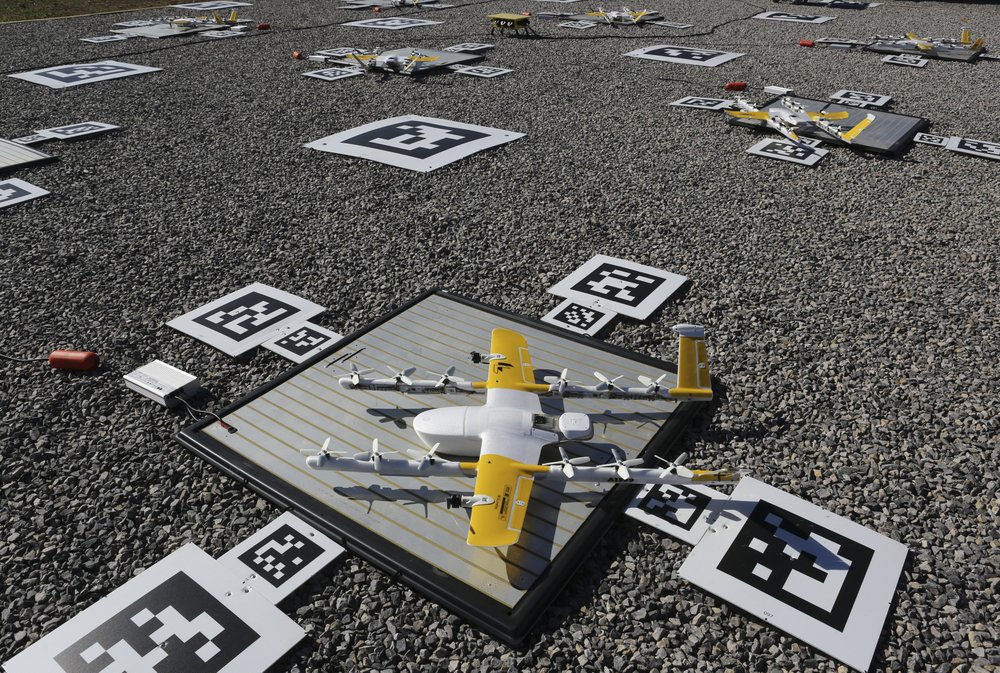 A Google affiliate started using drones Friday to deliver customers’ Walgreens and FedEx purchases in a test being run in a Virginia town.

Wing, which is owned by Google parent Alphabet, received federal approval earlier this year to make commercial deliveries by drone. It was the first drone company to receive the approval in the U.S., beating out Amazon’s Prime Air, which revealed its drone plans in 2013.

Earlier this month, UPS also got approval from the Federal Aviation Administration to fly delivery drones. The company has been running delivery tests with WakeMed’s hospital campus in Raleigh, North Carolina.

Wing partnered with Walgreens, FedEx and local gift shop Sugar Magnolia to perform the tests in Christiansburg, Virginia. Walgreens customers in the town will be able to order from a list of more than 100 items and get them delivered to their doors by drones.

Susie Sensmeier received a purple winter vest she ordered from Dicks Sporting Goods delivered by a drone to her front yard. The 81-year-old said she never thought she’d see something like it.

“I didn’t think I would live that long or it wouldn’t come in my lifetime, I’m thrilled,” she said.

The drones will start with a flying radius of about 4 miles (6.5 kilometers) from Wing’s distribution facility in Christiansburg. The drones are capable of flying a 12-mile (19-kilometer) round trip, and Wing expects to widen its radius eventually, though it did not give a timeline for expansion.

Wing has already launched tests in Canberra and Logan City, Australia, and Helsinki. But Friday’s flights mark its first live commercial deliveries in the U.S. since receiving the air carrier certification from the FAA.

Wing CEO James Ryan Burgess noted the speed with which drones can make deliveries — sometimes within minutes of ordering — and the environmental benefit of having fewer delivery trucks on roads.

“We’re looking at trends in cities including congestion and environmental sustainability,” he said. “We see drone deliveries as a key part of solutions to these.”

In Wing’s Australia pilot, Burgess said many of the deliveries are for food and cold medicine — things people may need when they don’t want to leave the house. But another popular drone delivery item is hot coffee, which the company is delivering in partnership with a local coffeehouse. The coffee stays hot because the delivery often takes less than four minutes, he said.

Privacy and safety concerns have been a concern across the U.S. as drone use increases. But Burgess stresses that Wing’s delivery drones do not operate with the same intention as those flown for hobbies.

The aim of Wing’s drones is not to take pictures and video, he said, but rather to safely make deliveries. There are cameras on Wing’s drones that are used for navigation, but Burgess said the images are processed onboard the aircraft and not streamed back to Wing’s main servers.

Wing has hinted it plans to expand the service to other towns, but has not revealed details.