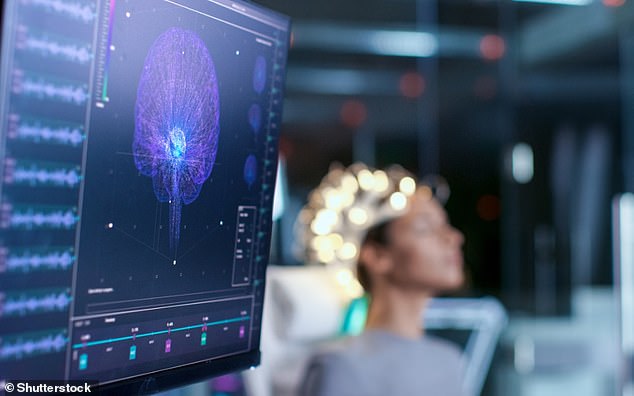 Pioneering brain implants currently used for stroke or epilepsy patients could be used to track people's thoughts - and relay them back to governments or companies.

That's the Orwellian warning from scientists at the Royal Society, who say reading chips pose a huge privacy issue.

The society has urged the Government to launch an inquiry and protect human rights against the commercial development of neural interface software.

It comes after both Elon Musk and Mark Zuckerberg expressed plans to incorporate the technology into their businesses.

This would allow users to interact with augmented reality environments using just their brain - no keyboards, touchscreens or hand gestures required.

'Access to peoples' thoughts, moods and motivations could lead to abuse of human rights,' the report warns.

'Companies might ask employees to wear interfaces that reveal their feelings. If thoughts could be accessed, then they might be used by corporations in efforts to market goods and services or by politicians or campaigners seeking recruits to their causes.

'The prospect of being constantly watched may itself alter people's behaviour and affect their wellbeing. Health insurers might use access to neural data to refuse cover.'

There are no internally-implanted interfaces licensed outside of medicine, but this may only be a matter of time.

In July, tech mogul Elon Musk announced that as early as 2020 his company, Neuralink, could apply to start human trials in the US using ultrafine electrodes inserted in the brain to allow people with locked-in syndrome or paralysis to control a computer or phone.

Meanwhile, Facebook-founder Mark Zuckerberg has expressed interest in 'telepathic typing' and the company is supporting research that aims to create an external headset able to transcribe a vocabulary of 1,000 words, at a rate of 100-words per minute, just by thinking.

The Royal Society expert working group says there is a possibility that, in future, 'people could become telepathic to some degree' as more sophisticated neural interfaces emerge.

However, the most advanced attempts to send thoughts to date are at the level of AI recognising simple brain patterns which correspond to pre-trained words or answers.

Dr Tim Constandinou, director of the Next Generation Neural Interfaces (NGNI) Lab, at Imperial College London, who contributed to the report, stressed that there were some real ethical issues to address: 'By 2040 neural interfaces are likely to be an established option to enable people to walk after paralysis and tackle treatment-resistant depression, they may even have made treating Alzheimer's disease a reality.

'While advances like seamless brain-to-computer communication seem a much more distant possibility, we should act now to ensure our ethical and regulatory safeguards are flexible enough for any future development.

'In this way we can guarantee these emerging technologies are implemented safely and for the benefit of humanity.'

Meanwhile, report co-chair Christofer Toumazou, Professor of Engineering at Imperial College London, said: 'The applications for neural interfaces are as unimaginable today as the smartphone was a few decades ago

'They could bring huge economic benefits to the UK and transform sectors like the NHS, public health and social care, but if developments are dictated by a handful of companies then less commercial applications could be side-lined.

'That is why we are calling on the government to launch a national investigation into this emerging field, to identify the UK's priorities and let the public help shape how the technology develops and where we want it to take us.'

Not that this is the first time the benefits of mind-reading AI has been touted. The U.S. military is also hoping to 'hack' soldiers' brains.

This would be done by activating a process known as 'synaptic plasticity' – a key process in the brain involved in learning – with electrical stimulation.

Some teams will be working with intelligence analysts and foreign language specialists to shape the platform around currently training practices.

Researchers will look into using the technique across a wide range of applications, including decision-making and spatial navigation, speech perception and threat recognition.

'Imagine you're struggling to learn something new, like multiplication tables or how to hit a golf ball,' said Dr Robert Rennaker, of the University of Texas at Dallas' Texas Biomedical Device Center.

'When you get it right, when that light bulb comes on, this system is being activated.

'By stimulating the vagus nerve during the learning process, we're artificially releasing these chemicals to enhance those connections active during learning.'

The Royal Society's full report can be read here.