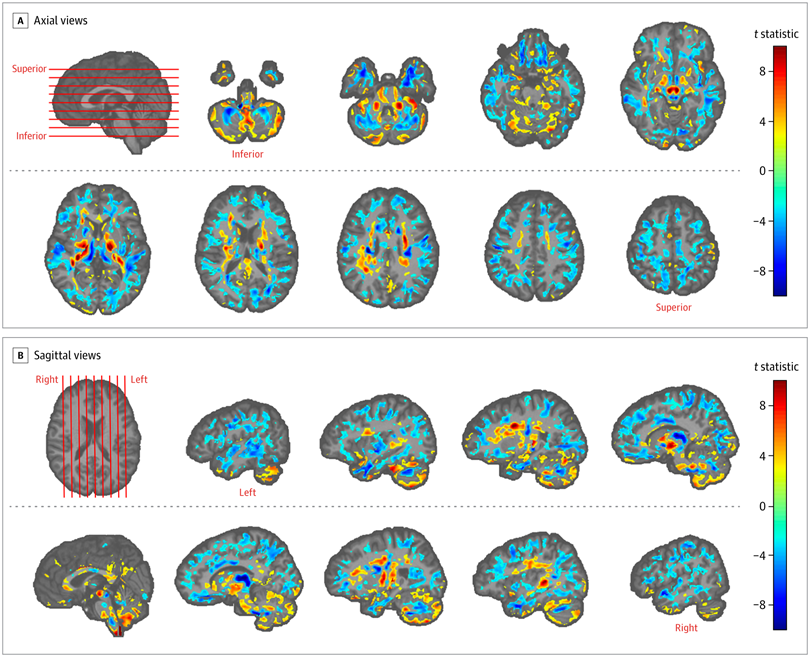 Brain imaging of 40 U.S. government personnel who experienced a host of neurological symptoms after possible exposure of an unknown source while serving in Cuba revealed significant differences in brain tissue and connectivity when compared to healthy individuals, according to a new report from researchers at the University of Pennsylvania’s Perelman School of Medicine. The findings are published today in JAMA.

“The areas implicated in the patients’ brains, namely the cerebellum as well as the visuospatial and auditory networks, align with the neurological symptoms that were observed in the patients,” said lead author Ragini Verma, PhD, a professor of Radiology and head of the DiCIPHR (Diffusion and Connectomics in Precision Healthcare Research) imaging lab at Penn. “These differences persisted even when people with some history of brain injury were excluded from the analysis.”

In 2016, U.S. government personnel serving in Havana, Cuba, and their family members began to report a variety of neurological symptoms, including difficulty with concentration and memory, dizziness, visual issues, and balance problems. The symptoms were linked to sudden, intensely loud noises heard in their homes and hotel rooms, which State Department officials later referred to as a “sonic attack” or “directional phenomena,” though the specifics of the alleged event remain unsolved. After initial examinations, the patients were sent to Penn’s Center for Brain Injury and Repair for evaluation, treatment, and rehabilitation in the summer of 2017, under the direction of center director and study co-author Douglas H. Smith, MD, the Robert A. Groff Professor of Teaching and Research in Neurosurgery.

A 2018 JAMA report published by Penn researchers documented the neurological symptoms that 21 patients who had reported exposure to the mysterious phenomena in Cuba experienced. Summing up these findings, Smith said that the symptoms were, “similar to those found in persistent concussion syndrome, yet there was no evidence of blunt head trauma.”

As part of the investigation into their signs and symptoms, the patients also underwent advanced neuroimaging with multimodal magnetic resonance imaging (MRI) at Penn, prior to receiving any comprehensive rehabilitation treatment. This retrospective analysis compared the brain images of 40 potentially-exposed personnel to 48 healthy individuals who were not exposed and did not demonstrate these signs and symptoms.

The group-based analysis, published in the new 2019 JAMA study, used various computational tools to examine structural, diffusion, and functional MRI images, finding statistically significant differences in brain volume, tissue properties, and connectivity between the patients and healthy control group. There was reduced white matter volume in the affected patients, along with a pattern of differences in measures of water diffusion in the tissue. The imaging also revealed lower functional connectivity in the visuospatial and auditory subnetworks. Notably, differences in tissue volume, water diffusion, and connectivity were found in the cerebellum, the part of the brain responsible for performing voluntary tasks, such as walking and writing.

“The cerebellar findings in this neuroimaging study are notable, given that a number of the patients evaluated exhibited abnormalities in balance and the coordinated movement of the eyes, both of which are associated with cerebellar dysfunction in the brain,” said study co-author Randel Swanson, DO, PhD, an assistant professor of Physical Medicine and Rehabilitation at Penn.

According to Verma, the pattern of differences found in this study do not resemble imaging-based investigations of any other pathology, like concussion and traumatic brain injury.

“These findings may represent something not seen before,” Smith said.

Verma likened the brain to a highway system, comprising roads (white matter) and traffic. Structural MRI provides information about the size of the roads, while diffusion imaging gives insight into the road conditions and how they are connected. An injury to the brain could contribute to a deterioration in the condition of the roads (reflected in white matter differences), leading to an alternate traffic pattern (altered functional connectivity). Therefore, Verma said, a multimodal investigation is essential to see a more complete picture of the injury. As the brain recovers, while the traffic pattern may go back to normal, the overuse of some roads may lead to wear and tear, or compensatory changes in the brain.

“It’s hard to tell where the problem started; the brain differences observed could be an immediate effect of the brain injury, or it could a compensatory effect of the recovery process,” Verma said. “It’s very difficult to say, especially with a retrospective, heterogeneous study, where people were included at various times after potential exposure. The important thing is that we did see differences at the group level.”