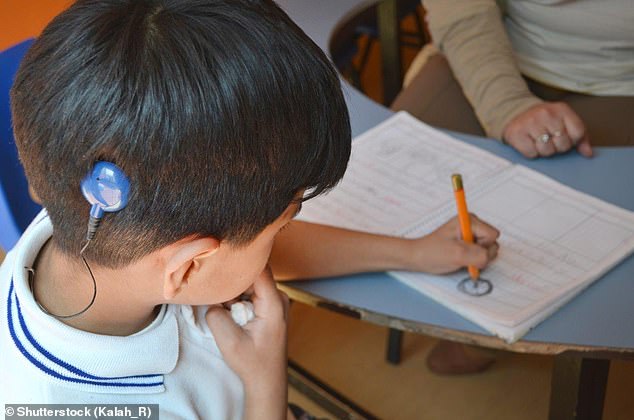 Deaf people could get 'almost perfect' quality hearing from a cochlear implant which deconstructs sounds as it hears them.

Researchers are developing a device which they say could significantly improve the quality of what people hear through the hearing aids.

In the UK around 1,200 people have cochlear implants – which essentially connect a microphone directly to the brain to recreate hearing – fitted each year.

But the current technology 'sounds metallic' and needs a 'significant' amount of brain training to use, according to scientists who claim their device will be better.

Researchers at the University of Greenwich say they're developing a device which, instead of directly magnifying outside noises, rebuilds it to pick out key parts.

It records multiple layers of sound in order to create something which sounds 90 to 100 per cent like what a normal ear would hear, they said.

This would protect against bits being missed if the technology is overpowered – for example by background noises drowning out speech.

'The signals created by current hearing implants sound very metallic to the user because they only a provide part of the full audio wave to the brain,' said Dr Wim Melis.

'This prevents a full reconstruction of the original signal.

'We developed a method that breaks down the input signal in its analogue components, while introducing multiple versions in storage.

'This means we can reconstruct the signal with very high accuracy, even if part of the system drops out.'

Current systems cannot distinguish between background noise and the speech people actually want to hear, Dr Melis said, because they amplify everything.

But using technology to separate the different sounds, pick out the most important parts and put them together into something which sounds fine-tuned could overcome this.

Cochlear implants are used in patients who are so deaf hearing aids don't help. They work by bypassing the inner ear – the cochlea – of those with severe hearing losses.

A microphone is attached to someone's head behind their ear and a device inside the skull which connects to the microphone.

Sound from outside is recorded and relayed to the internal device, which is directly wired to the auditory nerve which in turn sends noise signals to the brain. 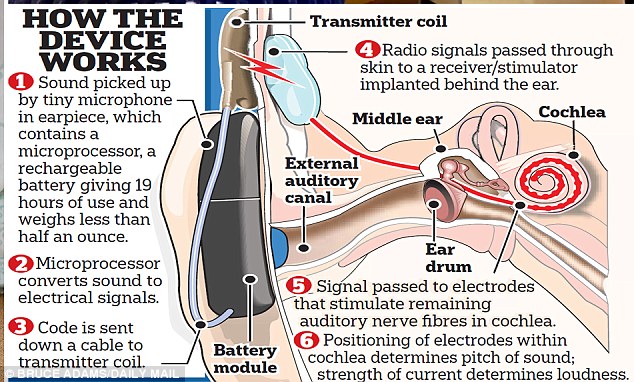 About 11million people in the UK – one in six – are deaf or have a hearing loss to some degree.

Hundreds of thousands of people worldwide have cochlear implants to restore some of their hearing.

Dr Melis added: 'What we're working on will be very low power, making it ideal for bio-medical use.

'While the current technology could be improved to provide better outputs, they would be more difficult to make, as well as being bigger and using more power.

'We envisage our system, which could be available commercially within about six years, to be the same size as current hearing implants, or possibly even smaller.'

HOW DOES A TRADITIONAL COCHLEAR IMPLANT WORK?

Cochlear implants are small hearing devices fitted under the skin behind the ear during surgery.

They have an external sound processor and internal parts, including a receiver coil, an electronics package and a long wire with electrodes on it (an electrode array).

The external processor takes in sound, analyses it and then converts it to signals that are transmitted across the skin to an internal receiver-stimulator, which sends the signals along the electrode array into a part of the inner ear called the cochlea.

The signal is then sent to the brain along the hearing nerve as normal.

This means cochlear implants are only suitable for people whose hearing nerves are functioning normally.

The implants cannot restore normal hearing but they can give a deaf person a good representation of sounds, helping them understand speech.

Whereas hearing aids amplify sound so they can be detected by damaged ears, cochlear implants bypass damaged parts of the ear and directly stimulate the auditory nerve.

Signals generated by the implant are sent via the auditory nerve to the brain, which recognizes the signals as sound.

Hearing through an implant is different from normal hearing and takes time to get used to it.

It allows people to recognize warning signals, understand their environment and enjoy conversations with people.

If a cochlear implant is recommended, it will be inserted into the ear (or both ears) during an operation and switched on a few weeks later.