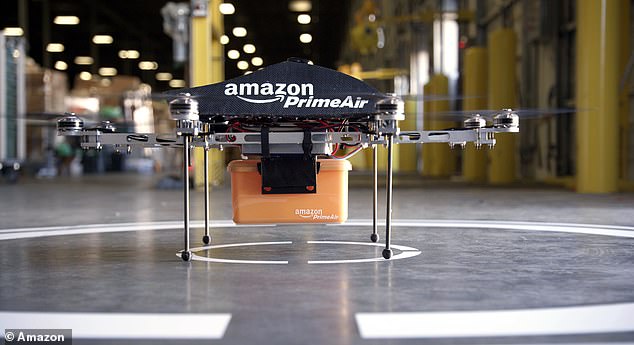 Amazon is considering launching drones that patrol neighbourhoods and could even call the police if they spot something amiss, according to a patent.

The company may set up a subscription service for worried homeowners that means its delivery aircrafts fly overhead looking for broken windows, graffiti or a fire.

Its drones will be able to take photos or record videos - sparking fears they could be used to collect data Big Brother-style.

In an apparent attempt to quell such fears, the patent states drone footage will obscure adjacent properties.

It will also require proof of ownership of the object or property being monitored, as well as permission from others living nearby, for example in an apartment block.

Amazon is thinking of offering different tiers and pricing that would see drones visit weekly, daily, or even hourly, the patent suggests.

Subscribers could either allow the drone to keep an eye out for general problems, or identify specific objects - such as an expensive car - to monitor.

After taking surveillance snaps, the images are analysed - either internally, by a computer at a hub, or by a human.

Then, an alert, such as a phone call, email or text message, would be sent to the subscriber, or to a private security firm, or the police or fire service.

Its drones could even be fitted with night-vision, infrared and thermal cameras for greater surveillance.

The patent reads: 'In the example described above, surveillance data was registered, which includes the identification of an object of interest, such as a car in a driveway.

'As the surveillance data is compared, a machine vision algorithm may determine a state change of the car in the driveway.

Others sensors Amazon is considering including are chemical sensors, to find fires or leaks, and noise detectors that can tell if an intruder is present.

Companies such as Amazon file hundreds of patents every year, with little indication as to which projects they will actually see to fruition.

Amazon has been testing out its delivery service, dubbed Prime Air, in Cambridge in recent years, and even delivered its first parcel in 2016.

The company hopes it can delivery items to customers within half an hour using unmanned aircraft.

Although that deadline has now passed, the company have continued to work on developing unmanned delivery aircraft, including at a testing facility in Cambridge. In 2016, workers at the Cambridge centre successfully delivered its first package using a drone, taking just 13 minutes to fly an Amazon Fire TV and bag of popcorn to the customer.

Earlier this month, the e-commerce giant announced at its inaugural re:MARS conference in Las Vegas that it plans to use self-driving drones to deliver packages to shoppers' homes in the coming months - but did not give an exact timeline.