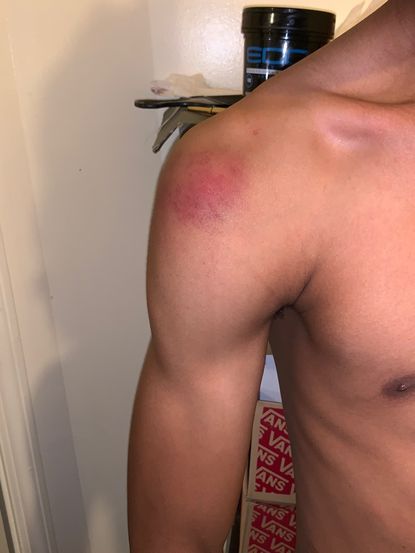 A Bronx teen says two NYPD cops roughed him up and then stalked him after a judge dismissed and sealed his arrest.

Kymani Johnson’s ordeal prompted his attorney to send a letter on Wednesday to Police Commissioner James O’Neill demanding the two officers from the 47th Precinct “cease and desist in their harassment of Mr. Johnson.”

Hours after a judge tossed charges of resisting arrest and obstruction against Johnson, 19, the cops appeared at his home, video obtained by the Daily News shows.

“This is gonna be our second home here ... I hope you’re behaving,” one of the cops said.

When Johnson went to meet his attorney Katie Rosenfeld three days after his arrest, cops showed up at his home again, according to the letter sent to O’Neill, which was seen by The News.

Johnson filed a Notice of Claim last week in anticipation of a lawsuit. But he said in an interview Thursday that he was focused on making sure the cops have stopped stalking him.

“I don’t know if they are still trailing me,” he said. “I still got to look over my shoulder, see if they’re still following, see if they’re coming to my house. That’s not the best feeling.”

The trouble began on May 27 when cops approached Johnson’s group of friends, suspecting one of them was smoking weed, Johnson told The News. The encounter got testy and Johnson began recording with his cell phone. He said a police officer whose last name was Hall became irritated and placed him in handcuffs. Video seen by The News shows that officer punching Johnson as cops put him in handcuffs.

It was the first time Johnson was arrested.

“She started punching me. I wasn’t doing anything wrong. I was calm, I wasn’t aggressive,” Johnson, a senior at New Visions AIM Charter High School II, said.

His lawyer provided photos showing bruises on Johnson’s shoulder that she said were from his encounter with police.

The letter named two police officers by last names only: Cruz and Hall. Asked about those officers in regard to Johnson, an NYPD spokeswoman said, “The officers were there to address community concerns over unauthorized barbecues without a permit, large gatherings, illicit drug use and noise complaints.”

“While in the park, officers observed a male engaged in criminal activity. The officers approached this individual and during their encounter, the male refused to comply with the officer’s commands and refused to place his hands behind his back. The police officers acted appropriately and within the scope of their employment,” the spokeswoman said.

After 12 hours in custody, a judge dismissed the charges against Johnson because cops made allegations that did not meet the legal standards of obstruction and resisting, Rosenfeld said.

It was not Johnson’s first unpleasant encounter with authority. According to court records, his mother received a $25,000 settlement from the city in 2014 after Johnson alleged that he was roughed up at middle school by a school safety agent when he was 13.

Johnson was released around 2 a.m. on May 28. He attended school that day, and when he came home Cruz and her partner were at his house, he recalled.

“Just behave. Tell your peoples,” Officer Hall said, according to the letter.

Two days later, while Johnson was meeting with Rosenfeld at the Emery Celli Brinckerhoff & Abady law office, he received a call from his sister that the cops were at their home again.

“She was upset,” said Johnson, who plans to attend college next year.

“The fact that a notice of claim is filed does not mean it has factual or legal merit,” the police spokeswoman said.

Johnson said he hired a lawyer to prevent police from menacing people in a similar way.

“I just hope the police do their jobs better. That’s really it,” he said. “The police are not supposed to be people I’m scared of. They’re supposed to protect and serve.”