US military research body DARPA is funding a project to create a mind-reading helmet that could let soldiers fly drones and control robots telepathically.

Led by Texas-based researchers, the project will start by trying to read the vision of one person and transfer it into the brain of someone who is visually impaired.

The helmet works by using both light and magnetic fields to interact with specially-reprogrammed neurons in the brain of the wearer.

The investigation is part of DARPA's Next-Generation Nonsurgical Neurotechnology (N3) program, which is funding five other similar projects aiming to create two-way interfaces that can transmit data between the human brain and machines.

The uses, they wrote, might include 'control of active cyber defence systems and swarms of unmanned aerial vehicles, or teaming with computer systems to multitask during complex missions.'

'DARPA is preparing for a future in which a combination of unmanned systems, artificial intelligence, and cyber operations may cause conflicts to play out on timelines that are too short for humans to effectively manage with current technology alone,' said N3 program manager Al Emondi.

DARPA has long supported neurotechnology research, but such has previously been confined to volunteers with a clinical need that could be addressed — such as enabling thought-control of prosthetic limbs or restoring the sense of touch.

Surgery on test subjects or soldiers who are able-bodied, however, is ruled too risky.

The MOANA project is exploring a less invasive, nonsurgical approach that uses gene therapy to allow a helmet to remotely connect with the human brain.

'In four years we hope to demonstrate direct, brain-to-brain communication at the speed of thought and without brain surgery,' said Rice engineer Jacob Robinson, who is the lead investigator on the MOANA research project.

'Speed is key; we have to decode neural activity in one person’s visual cortex and recreate it in another person’s mind in less than one-twentieth of a second.'

'The technology to do that, without surgery, doesn’t yet exist. That’s what we’ll be creating,' he added.

The distinction between the approach being taken by Professor Robinson and his colleagues and the other N3-funded projects will be how they will handle DARPA's requirements for the speed and resolution of the mind reading technology.

Alongside transmitting thoughts in less than 50 milliseconds, the military research body wants devices that read from and write to at least 16 locations across the brain.

The MOANA helmet will be comprised of a series of red and infrared light emitters and detectors arranged around a skull cap, focused in on the wearer's brain. 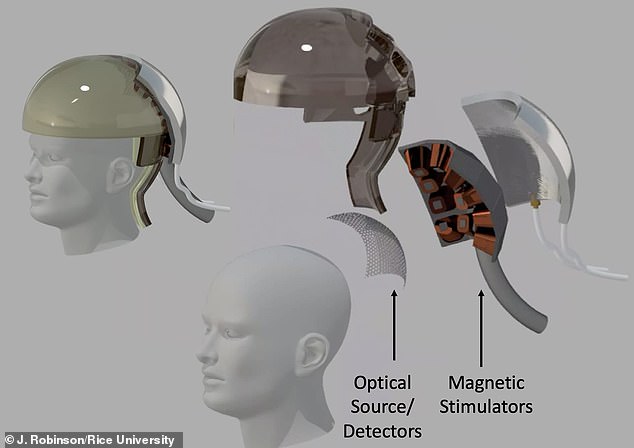 Before putting on the helmet, wearers will undergo a process to reprogram specific neurons in 16 target areas of their brains, such that the neurons produce special proteins that absorb light when a neuron is active and firing.

This biological modification will allow the wearer's brain activity to be read, thanks to the red and infrared wavelengths of light emitted by the helmet, which are capable of reaching into the human skull.

'Most of this light scatters off the scalp and skull, but a small fraction can make it into the brain,' said Rice electrical and computer engineer Ashok Veeraraghavan.

'This tiny fraction of photons contain information that is critical to decoding a visual perception,' he added, noting that ultra-sensitive detectors capable on picking up on individual photons of light will be needed to detect this faint signal.

'Our aim is to capture and interpret the information contained in photons that pass through the skull twice, first on their way to the visual cortex and again after they are reflected back to the detector.' 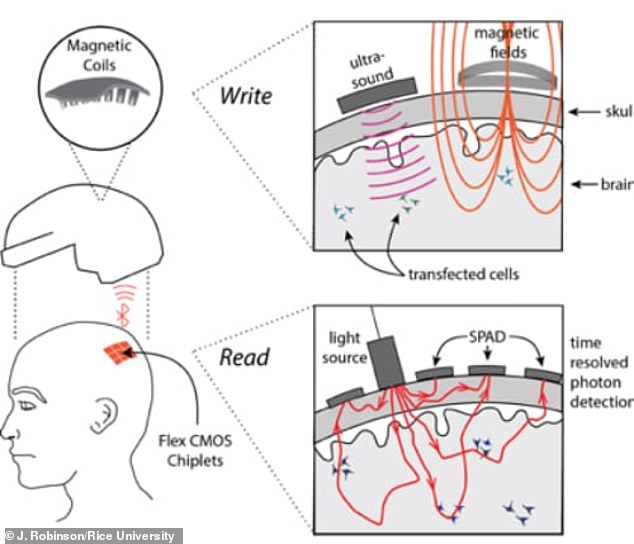 The helmet will use this information to create a three-dimensional image of the wearer's brain, on which the reprogrammed neurons will show up darker on the scans when they are active, thanks to how they absorb light.

The same ultrasound-guided, viral vector gene delivery technique the researchers will use to reprogram the neurons is also presently being trialled as a treatment for age-related vision loss as well as certain cancers as neurological conditions.

To feed data back from the helmet systems, researchers will use a similar approach.

Instead of modifying neurons to absorb light, however, the system to transfer information into the brain will rely on neurons that have been reprogrammed to fire when they receive targeted magnetic signals sent by the helmet.

This will be achieved by modifying the neurons to create proteins that tether iron nanoparticles to the ion channels inside each of the cells.

'We plan to use magnetic fields to heat the iron, which in turn will open the channel and fire the neuron,' explained Professor Robinson.

'But it is not enough to do that every second or two, he added.

'Our system must respond in milliseconds for the receiver and perceiver to experience the perception close enough in time that it seems simultaneous.' 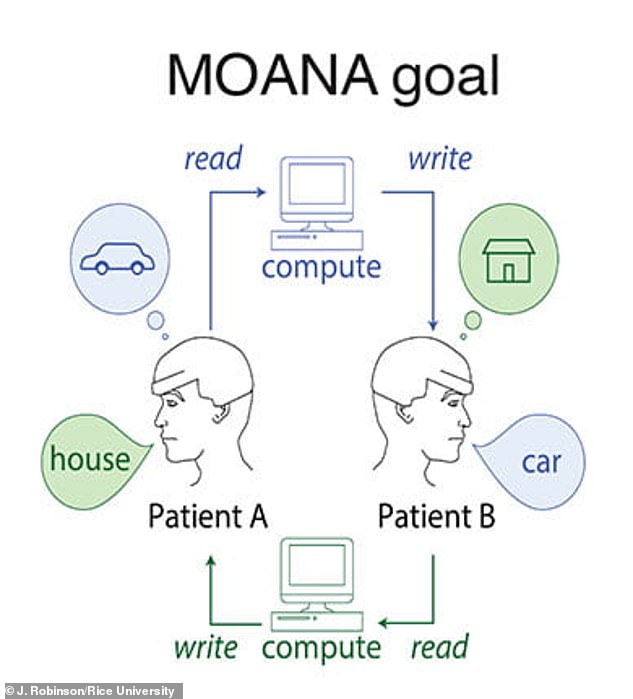 Achieving a suitable quality of communication using the helmet could prove challenging, however, with the level achievable using 16 channels information channels being a factor that remains to be determined.

This is because human thought is extremely complex, requiring the firing of various different neurons to all be coordinated, and often across different parts of the brain.

'We know that the circuits of the brain that are involved are very dense,' said Caleb Kemere, a bioengineer and electrical engineer at Rice University who had previously studied neural circuits using invasive approaches.

'It’s possible or even likely that early 16-channel demonstrations may deliver somewhat muddied perceptions, but this is an exciting path towards a more noninvasive future,' he added.

'The timing, density and performance of the systems we are developing will be orders of magnitude more sophisticated than anything currently available.'

It may be some time, however, before MOANA is made into a working reality.

According to Professor Robinson, it will likely take more than three years of research, first with cell cultures and then with animals, before the gene reprogramming technique is trialled in any human test subjects.

Commercial applications are likely 10–20 years away at present.

Nevertheless, practical applications are definitely in mind — with the proof-of-concept that the research team is working towards being to project the vision of one person into the mind of another individual with complete vision loss.

The MOANA team is coordinating its efforts with researchers at the Baylor College of Medicine in Houston, Texas, who are conducting clinical trials to similarly try and restore vision, but through the use of a prosthetic that stimulates the visual cortex.

Unlike the MOANA helmet, however, this device relies on surgically-implanted electrodes.

'There may be patients who prefer a visual prosthetic that doesn’t require brain surgery,' Professor Robinson said.

'If our work in cells and animal models goes well, MOANA could be approved for clinical tests as a nonsurgical alternative,' he added.

'It would require gene therapy, but not brain surgery.'

'By removing the need for surgery, N3 systems seek to expand the pool of patients who can access treatments such as deep brain stimulation to manage neurological illnesses,' said Dr Emondi.

For DARPA, however, Dr Emondi said that the end goal lies in 'moving neurotechnology beyond the clinic and into practical use for national security.'

'If N3 is successful, we’ll end up with wearable neural interface systems that can communicate with the brain from a range of just a few millimetres.'

Dr Emondi compared such devices with the protective and tactical gear service members don in preparation for a mission.

'In the future, they might put on a headset containing a neural interface, use the technology however it’s needed, then put the tool aside when the mission is complete,' he said.

Professor Robinson and colleagues told the Express that they are aware of the potential for such thought-transmitting technologies to be abused.

'This concern is even greater when we think about technologies that are going to interact with our brain, which we hold so close to our very identity,' he said.

'And there is additional concern when technologies like these are being developed by the US government, as there is always the potential for them to be misused.

HOW WILL THE MOANA HELMET WORK?

The Magnetic, Optical and Acoustic Neural Access (MOANA) project is exploring a minimally invasive, nonsurgical approach to connect human brains with a machine via a special helmet.

This allows the helmet to detect active brain regions using red and infrared light that can pass into the skull.

A second type of gene therapy will prime other neurons so that they can be fired remotely using magnets.

WHAT OTHER 'TELEPATHIC' TECH IS DARPA INVESTIGATING?

The US military research body is supporting a total of six projects under the Next-Generation Nonsurgical Neurotechnology (N3) program.

All aim to create two-way interfaces that can transmit data between the human brain and machines.

Alongside transmitting thoughts in less than 50 milliseconds, DARPA wants devices that can read from and write to at least 16 locations across the brain.

Other projects in the N3 program include a project at Thousand Oaks, California-based Teledyne Technologies that is working on a method to detect the tiny, localised magnetic fields that correlate with brain activity.

Another, based at Carnegie Mellon University in Pittsburgh, will use ultrasound-guided light to read brain activity and electric fields to stimulate neurons to transmit data back into the brain.

DARPA has long supported neurotechnology research, but such has previously been confined to volunteers with a clinical need that could be addressed — such as enabling thought-control of prosthetic limbs or restoring the sense of touch.