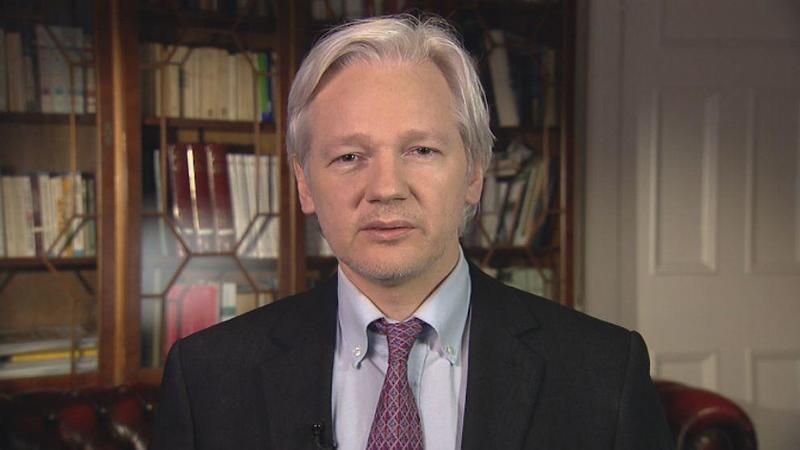 Julian Assange accused a "weak" Ecuador of starting to "lean on the United States and the UK for various kinds of support" last October - which he linked to the deteriorating conditions at the country's London embassy where he has been living for nearly seven years.

Assange made the comments during an October 29, 2018 court hearing requesting the restoration of his ability to communicate with the outside world. Transcripts of the exchange were obtained by the Gateway Pundit's Cassandra Fairbanks, who has traveled to London amid reports that Assange is about to be kicked out of the embassy - a claim Ecuador denies.

On March 28 of last year, Ecuador virtually gagged Assange after the WikiLeaks founder challenged whether Russia was behind the poisoning of a former Russian double agent, Sergei Skripal - which Ecuador said had breached "a written commitment made to the government at the end of 2016 not to issue messages that might interfere with other states." Though Assange's privileges were eventually restored, he and his legal team sued the Ecuadorian government, and since then, the tensions have only escalated.

"I have been in this embassy without sunlight for six years and essentially isolated from most people for seven months and, including electronic communication, the telephone etc, from my young children," Assange said during the October 29 proceeding in front of an Ecuadorian court.

"It has … interfered with my ability to work, to make a living, and with my deeply held principles that I have fought for all my life, which is to uphold the right of freedom of expression, the right for people to know, the right of the freedom of the press and the right for everyone to participate in their society and the broader society," added Assange.

Assange noted that due to his isolation, he has been unable to defend himself against various accusations, which ave "resulted in a climate of libel and fake news that might be expected for someone who has been in the business of exposing very large and very powerful corrupt organisations or organisations that abuse human rights."

What's more, the WikiLeaks founder suggested that he is not safe in the embassy.

"I am an assassination risk. It's not a joke. It is a serious business," said Assange - who noted that "There have been attempts by people to get into this embassy through the windows at night. It appears that there may have even been an attempt last night, at 4:30am."

In other words, someone may have wanted to stop Assange from testifying last October.

In 2016, WikiLeaks tweeted that it took UK police two hours to respond to a call after an unidentified man attempted to scale the wall of the Ecuadorian Embassy in the U.K. at 2:47 am. The would-be intruder escaped security and managed to flee to safety while embassy security waited two hours for U.K. police to take the two minute walk from the police station to the embassy.

It was when Assange began to criticize a 'weakened' Ecuadorian Government which he accused of being influenced by the UK and United States that things got heated between the WikiLeaks founder and Ecuador's General Attorney Inigo Salvador - who had the judge halt Assange's speech to interject.

"...due to various weaknesses in the Ecuadorian Government, namely the split - which I do not want to have nay part of - within the Government's party, it has become weak and it has therefore started to lean on the Untied States and the UK for various kinds of support and this has caused an undue amount of influence by the United States. It really comes from - well, we can trace it back - in March 2017 WikiLeaks published a very important publication, the largest ever in the history of the CIA... -Julian Assange, October 29, 2018

Assange was cut off by the translator, who asked "Mr. Assange, can you wait for a second? The Judge has halted your presentation. Please stand by. The Attorney-General is asking for the floor."

"I have decided not to remain quiet, given the malicious and perverse insinuations about what Ecuador is doing, it has been influenced by foreign states," said the AG, who insisted "Ecuador is a sovereign country and this is how it's provided asylum and protection to Mr. Assange." (full transcript below)

Of course, according to Fairbanks - Ecuador's new president has been trying to get rid of his 'Assange problem' for a while.

Last December the New York Times revealed the country’s president tried to sell Assange to the US for debt relief. Ecuador received $4.2 billion in a US backed IMF bailout on February 4. The US seeks Assange’s extradition over WikiLeaks’ 2010 publications on war and diplomacy. His alleged source, Chelsea Manning, was re-jailed last month to coerce her into a secret interrogation against him. -Gateway Pundit

On Thursday, WikiLeaks tweeted that a "high level source within the Ecuadorian state has told @WikiLeaks that Julian Assange will be expelled within "hours to days" using  the #INAPapers offshore scandal as a pretext"

BREAKING: A high level source within the Ecuadorian state has told @WikiLeaks that Julian Assange will be expelled within "hours to days" using the #INAPapers offshore scandal as a pretext--and that it already has an agreement with the UK for his arrest.https://t.co/adnJph79wq

The corruption scandal WikiLeaks referenced involves WikiLeaks' reporting on papers alleging that Ecuadorian president Lenín Moreno enriched himself from an offshore account in Panama — allegations which Moreno has vehemently denied. For his part, Moreno has ramped up pressure and scrutiny on Assange this week, saying in a radio interview that the whistleblower and journalist has egregiously and repeatedly violated the terms of his asylum.

Moreno went so far as to indirectly suggest Assange and WikiLeaks leaked personal photos of him and his family online, but without directly referencing him by name.

"Photos of my bedroom, what I eat and how my wife and daughters and friends dance [have circulated]," Moreno described, as reported by The Guardian. "We should ensure Mr. Assange’s life is not at risk but he’s violated the agreement we have with him so many times," Moreno said, according to the report.

WikiLeaks says Moreno is attempting to generate a "false pretext" and publicly justifiable excuse on the back of the INA Papers scandal for ending Assange's asylum on the legal technicality that "conditions" have been broken.

Why do you suppose the Foreign Minister of Ecuador would choose today of all days to start tweeting about mechanisms for unilaterally revoking asylum claims? https://t.co/RS8xPBwZMJ

Ecuador on Saturday denied that it has plans to expel Assange, or that it had an agreement with UK authorities to hand the WikiLeaks founder over. Ecuador's Foreign Ministry accused Assange of "ingratitude" towards his hosts, saying "the asylum seeker and his associates express once again ingratitude and disrespect toward Ecuador."

Ecuador’s ministry of Foreign Affairs, in a menacing statement released at 3am this morning (GMT), stated that the revocation of asylum is a “sovereign act” but that his expulsion is not “imminent” — but declined to define what was meant by “imminent.”

Last Monday, this journalist visited Assange in the embassy and was locked in a room as an argument ensued between the publisher and Ecuador’s Ambassador Jaime Alberto Marchán.

Assange claimed that he was being treated as a prisoner, that they would not let him meet a journalist in a room that did not contain surveillance equipment, and that the Ecuadorian ambassador was acting as an agent of the US government.

Members of the US government believe Ecuador is in fact giving them what they want regarding Assange. A former senior State Department official told Buzzfeed in January, “as far as we’re concerned, he’s in jail.” -Gateway Pundit

In response to word of Assange's potential expulsion, supporters gathering outside Ecuador's London embassy this weekend. At one point, two UK cops enter the embassy, only to leave a short while later.

They left after a few minutes.

Can anyone hear what they said on the intercom?