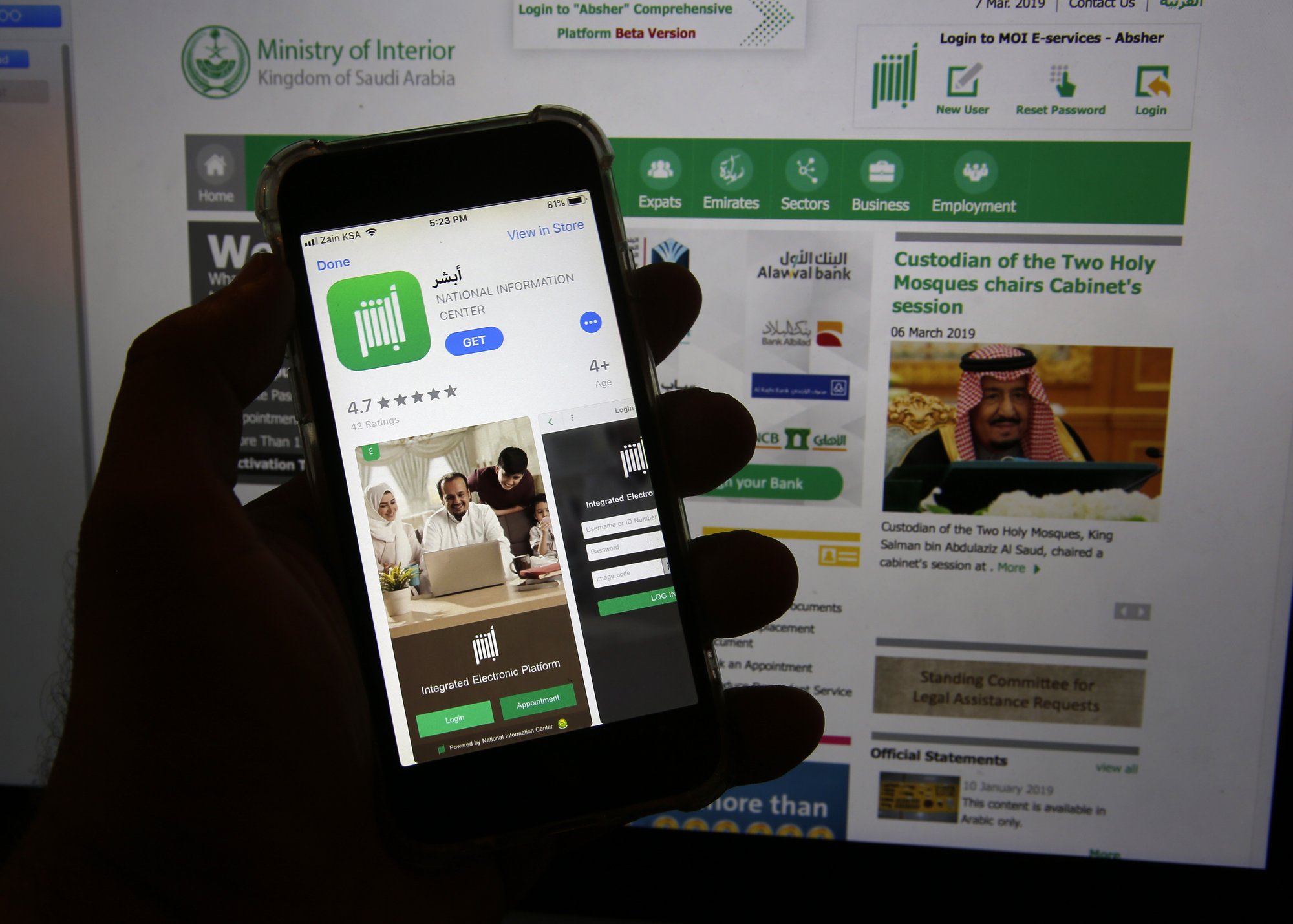 The Saudi government app Absher is mostly a way for people to pay traffic fines and complete other administrative tasks electronically. But one feature isn’t sitting well with civil-rights advocates: the ability for men to grant or deny a woman permission to travel.

The app is merely implementing existing laws, and removing it would not change or remove the guardianship rules in place. Nonetheless, the feature has sparked calls for leading tech companies to block access through their app stores.

“The ingenuity of American technology companies should not be perverted to violate the human rights of Saudi women,” U.S. Rep. Jackie Speier, a California Democrat, wrote in a letter to Apple and Google.

According to Speier’s office, Google won’t remove the app because it doesn’t consider it a violation of Google’s terms of service, while Apple is still investigating.

Google and Apple declined to comment. Apple CEO Tim Cook told NPR last month that the company would “take a look” at the app.

The app includes a setting where Saudi men can grant or deny their spouses, daughters and minor sons permission to travel abroad. Through an integrated system, immigration officials at the airport can see the status of a woman’s travel permit by scanning her passport details.

At one time, Saudi men were also being notified by text messages when dependents exited and entered Saudi Arabia, though Absher officials quoted in local Saudi media say that those text messages were not sent through Absher and that this texting service was stopped in 2014. Nonetheless, some published reports say the texts are still available. The app itself doesn’t appear to track women using the phone’s location services.

Absher was created in 2007 and can also be accessed through a website, so removing the app would not remove men’s ability to electronically grant or deny travel permission to women. Although the app and its travel feature has been around for years, it has only recently become a focus of intense criticism by women’s rights activists and other critics.

Some civil-rights advocates acknowledge that the ability for guardians to control travel permissions exist regardless of the app. But they complain that U.S. companies are enabling that practice by allowing the app.

“These companies don’t have to support this,” said Jillian York, director for international freedom of expression at the Electronic Frontier Foundation. “They’re making the choice.”

Sen. Ron Wyden, an Oregon Democrat, wrote Apple and Google to criticize that they “are making it easier for Saudi men to control their family members from the convenience of their smartphones and restrict their movement.”

Many Saudi citizens have pushed back against calls for the app’s removal. Khawla Al-Kuraya, a female professor in Riyadh, Saudi Arabia, wrote in a Bloomberg opinion piece that the app makes travel easier to enable by cutting out long lines and paperwork.

Some young Saudi women who have fled the country in recent years did so by accessing their father’s phone and changing the setting to grant themselves permission.

The Saudi Interior Ministry said the app is “an essential and direct means” for Saudis to access government services anytime, anywhere. The ministry also condemned what is said was a “systematic campaign aimed at questioning the purpose of Absher services.”

Apple’s app guidelines seem to give the company latitude in what apps are considered unacceptable, including those that have “content that is offensive, insensitive, upsetting, intended to disgust or in exceptionally poor taste.” Google also has guidelines to prohibit apps that facilitate harassment and characteristics tied to systemic discrimination.

In recent years, there have been 13 billion visits to the Absher app, 11 million users and more than 110,00 million services done, according to Absher officials quoted in local Saudi media.