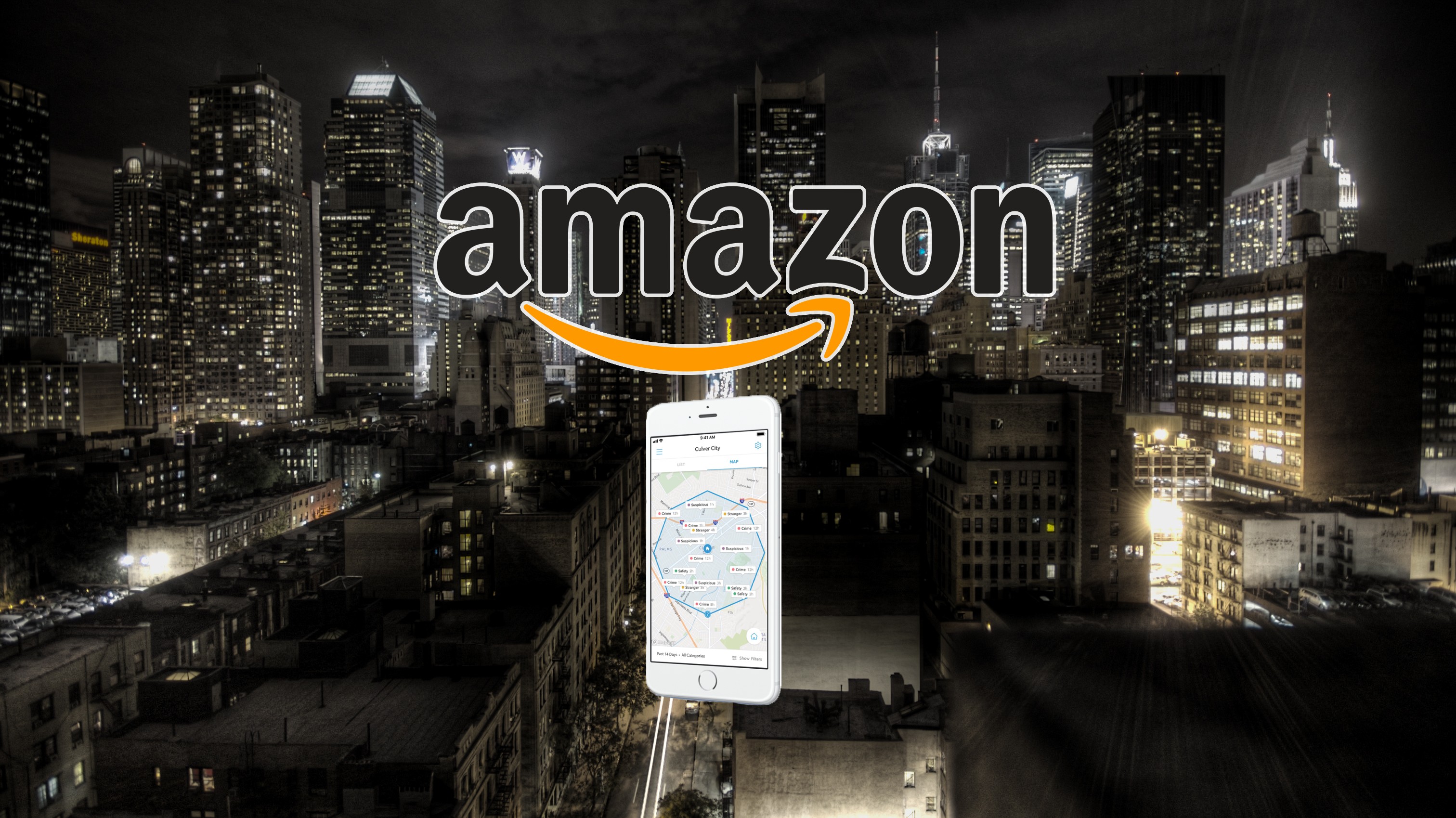 Neighbors, a social media crime-reporting app owned by Amazon, creates a digital ecosystem in which you are encouraged to assume the worst about your neighbors—and people of color are once again being harmed.

“MY PACKAGE THIEF HAS BEEN ARRESTED!!!,” reads a post on Neighbors, a “neighborhood watch” social network run by Ring, which is a home security systems company owned by Amazon.

The post shows two side-by-side images: one is of a man as captured on a home security camera, and the other is of someone who appears to be the same man, as photographed in a mugshot.

“This man stolen my packages along with my neighbors packages on 1/14/19 and I’m happy to report that he was arrested on 2/3/19 by the NYPD,” the post caption reads. The comments universally congratulate the person who posted the images.

Neighbors defines itself as a “new neighborhood watch,” according to its website. But on a more practical level, Neighbors is like NextDoor, a social platform for local communities, if the posts on NextDoor were only reports of crime or “suspicious activity.” NextDoor has faced long-standing issues of racism on its platform, and Ring faces the same issue. Each Neighbors post has one of the following labels: Crime, Safety, Suspicious, Stranger, or Lost Pet. Ring captures footage that can help leads to arrests when that footage is shared with police, like in the case described above.

Beyond creating a "new neighborhood watch," Amazon and Ring are normalizing the use of video surveillance and pitting neighbors against each other. Chris Gilliard, a professor of English at Macomb Community College who studies institutional tech policy, told Motherboard in a phone call that such a “crime and safety” focused platforms can actively reinforces racism.

“We know from a bunch of high profile incidents in the past, and even when people live in a particular neighborhood, often their white neighbors don’t identify them as neighbors or belonging in those space,” Gilliard said. “So there’s a way that blackness can be seen as foreign, even when you ‘belong.’ And those systems codify that in a way that makes me really uncomfortable.”

In Amazon’s version of a “new neighborhood watch,” petty crimes are policed heavily, and racism is common. Video posts on Neighbors disproportionately depict people of color, and descriptions often use racist language or make racist assumptions about the people shown. In many ways, the Neighbors/Ring ecosystem is like a virtual gated community: people can opt themselves in by downloading the Neighbors app, and with a Ring camera, users can frame neighbors as a threat.

Motherboard individually reviewed more than 100 user-submitted posts in the Neighbors app between December 6 and February 5, and the majority of people reported as “suspicious” were people of color. Motherboard placed the “home” address at the VICE offices in Williamsburg, Brooklyn and kept the default 5-mile neighborhood radius, meaning the neighborhood encompassed all of lower Manhattan, most of Brooklyn, and parts of Queens and Hoboken. 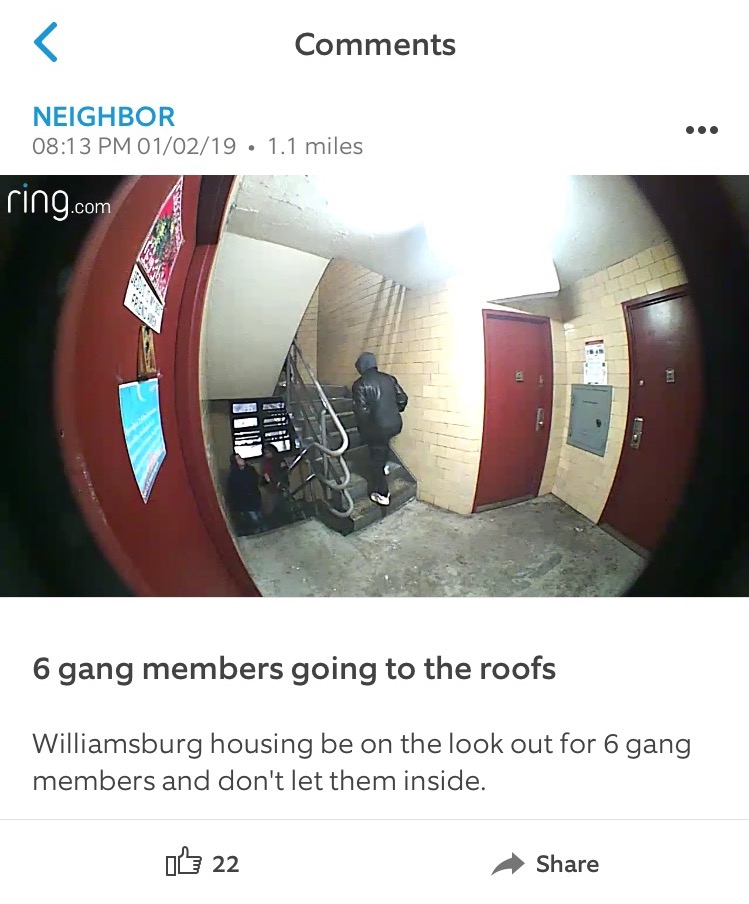 One video taken from a camera perched outside an apartment door shows six young people, all people of color, walking up a stairwell. A few wore backpacks. The video, posted on January 2 at 8:13PM, was titled, “6 gang members going to the roofs.” The comments encourage the poster to call the NYPD, and suggest without evidence that the young people planned to smoke crack. The video was removed after Motherboard asked Ring about it.

The Neighbors posts that depict crimes are almost always petty crimes. 75 percent of the “crime” posts reviewed by Motherboard were for stolen packages. But in the comments for these videos, people quickly engage in name calling (“low life,” “dummy,” “piece of garbage,” or “@$*hole”) and verbal abuse.

One post on Neighbors' “Watchlist,” which is hand-selected by Ring employees and appears at the top of the app, shows a black man stealing a package from a door step. Neighbor41 wrote, “Hope they put his ass in rikers, share a room with 50 other criminals. Oh, and one toilet.” A reply from Neighbor64 implied that he hopes the person gets raped.

“These are life threatening acts, using platforms as megaphones.” 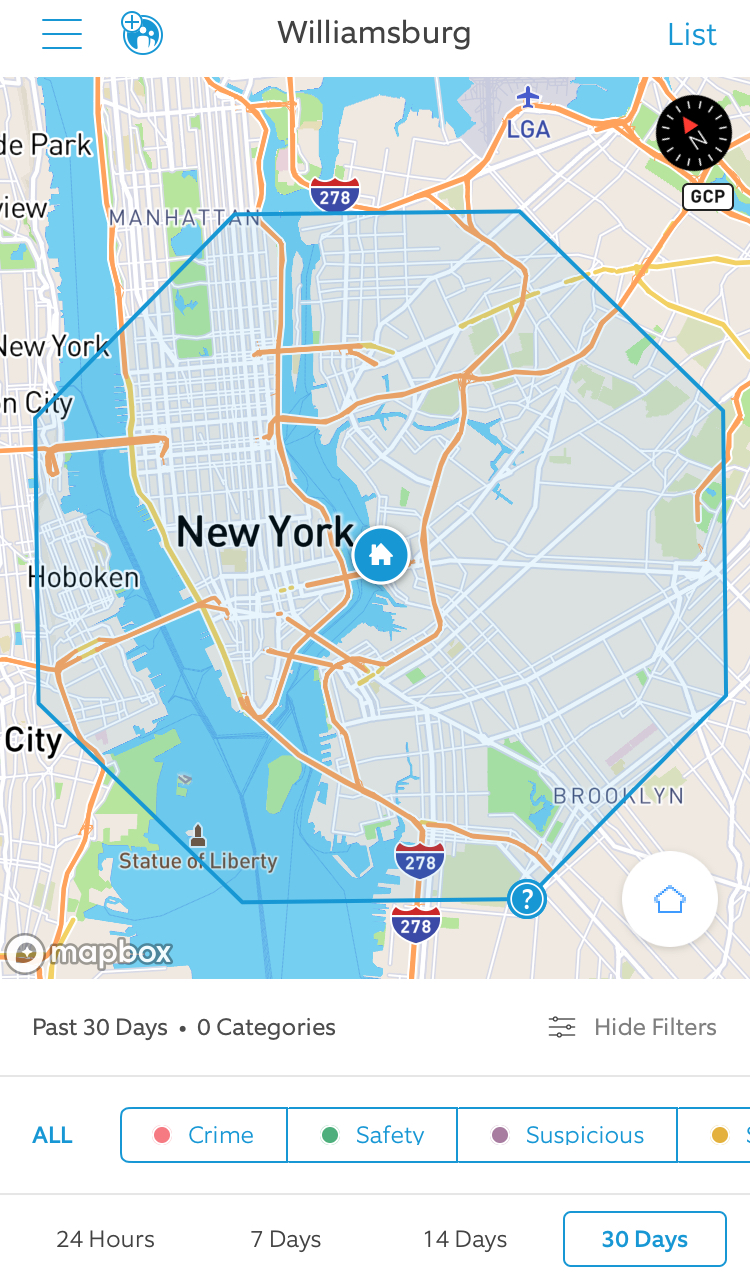 According to the Ring Community Guidelines, the Neighbors app bans “direct threats against any individuals, bullying, harassment, and any posts that demean, defame, or discriminate,” but it relies on Neighbors users to report posts that violate that rule. The guidelines also claim that only “crime and safety related content” is allowed. The guidelines do not define what qualifies as “safety,” but they do encourage users to “consider the behavior that made you suspicious and whether such suspicion is reasonable.”

“In describing individuals, focus on providing a sufficient amount of relevant details to distinguish this individual from others who may share similar characteristics,” the guidelines state. “Reports that, for example, list nothing but a suspect's ethnicity are not nearly as useful as ones that also include the suspect's hair color and style, clothes or jewelry they were wearing, approximate age and/or distinguishing marks, tattoos, or scars.”

Motherboard asked Ring whether the company moderates content on Neighbors or reviews posts for racism. A company spokesperson said, “The Neighbors app by Ring is meant to facilitate this collaboration within communities by allowing users to easily share and communicate with their neighbors and in some cases, local law enforcement, about crime and safety in real-time.”

Users on Neighbors frequently encourage other users to call the police based on footage shared. When a crime such as a stolen package is depicted on Neighbors, a Ring employee will post a comment that says, “If you have filed a police report, please share the case number and officer’s contact information below. Once we have a case number, the Neighbors team may use your video to help law enforcement identify the subject.”

Shahid Buttar, the Director of Grassroots Advocacy for the Electronic Frontier Foundation, told Motherboard that calling the police could have lethal outcomes for black or brown neighbors, but calling the police is often quickly and explicitly encouraged by Neighbors users.

“Given the reality of police violence, with impunity, impacting primarily people of color in the United States, these kinds of acts threaten the lives of third parties who are simply, in some cases, doing their jobs or living in their own neighborhoods,” Buttar said. “These are life threatening acts, using platforms as megaphones.” 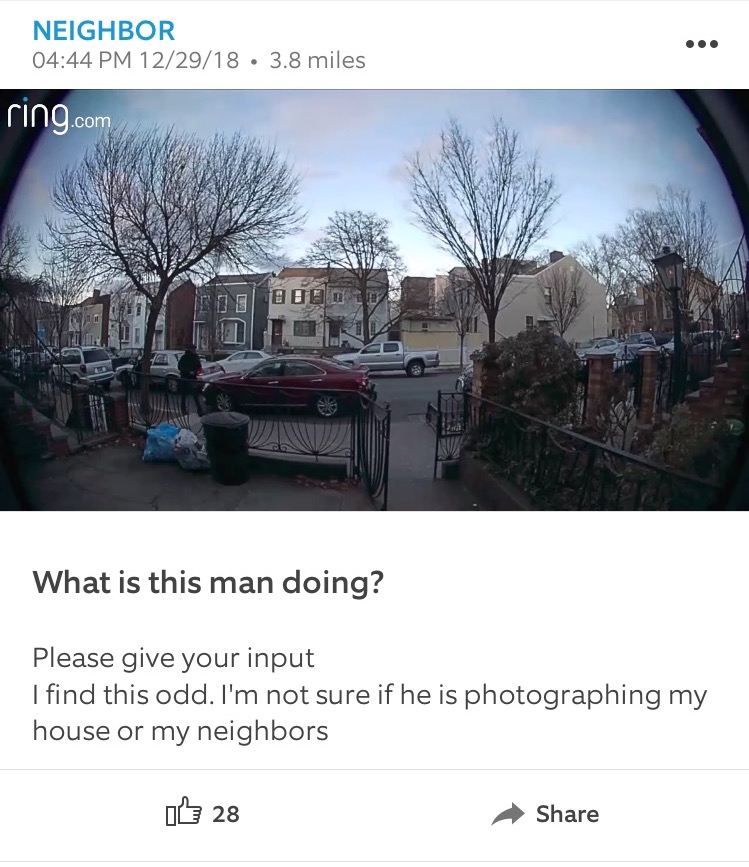 In a tweet, Gilliard predicted that Ring would be used to call the police on delivery people of color making deliveries for Amazon. In fact, several posts on Neighbors complain about delivery employees, always people of color, not delivering their packages gently enough. In this way, Ring is being used not as a neighborhood watch, but as a surveillance device used against people who are merely doing their jobs.

"Mail person just throws item,” one post from February 3 reads. “Does not ring bell to notify there is something in-front of the door or shows any care for the fragility of the package. I will be reporting him."

Ring also extends into the physical world of policing. The police departments of Aurora, CO; Los Angeles, CA; Albuquerque, NM; Hayward, CA; and Lakeland CA have all received discounts on Ring products. In the case of Hayward, CA, this discount extended to all citizens of the town. Certain police departments, such as in Aurora, CO, used the Ring cameras as part of a "porch pirate campaign” where bait boxes filled with rocks and sealed with Amazon tape were left on porches rigged with Ring cameras. Matthew Longshore, a spokesperson with the Aurora Police Department, told the Denver Channel that Amazon provided the boxes, and Ring sent the doorbells overnight. According to a Ring spokesperson, the company offers rebates or subsidies to cities police departments with a surplus in their budget.

#OperationGrinchGrab 🏴‍☠️ Porch Pirates, beware! 🏴‍☠️ GPS trackers r in boxes on porches of diff homes & we are watching you 👀 on @ring doorbells! Think twice b4 stealing a package b/c you’ll have explaining to do. Thank u @amazon & @USPIS_DEN for ur partnership & help! pic.twitter.com/aXVip2nYsD

#OperationGrinchGrab Porch Pirates, beware! GPS trackers r in boxes on porches of diff homes & we are watching you on @ring doorbells! Think twice b4 stealing a package b/c you’ll have explaining to do. Thank u @amazon & @USPIS_DEN for ur partnership & help!

“Public subsidies or promotions of platforms are incredibly powerful instruments,” Buttar said to Motherboard. “As a matter of simply good governance, there should be simply good scrutiny about platforms before municipalities support them. And if these platforms are leading to people facing potentially life-threatening interactions with police, for no reason, that would be a good reason not to promote those tools.”

Ring sells a very particular message: while you shouldn’t trust your neighbors, you can trust Amazon to help police it. The Neighbors app is free. But the more unsafe the app makes you feel the most inclined you would feel to dole out money for a Ring home security system.

Neighbors functions as a fear and peer pressure-driven advertisement for a fancy, Amazon-owned camera system. But in practice, Neighbors reinforces the racist biases of its users, and actively puts people of color at risk in communities where the app is being used. 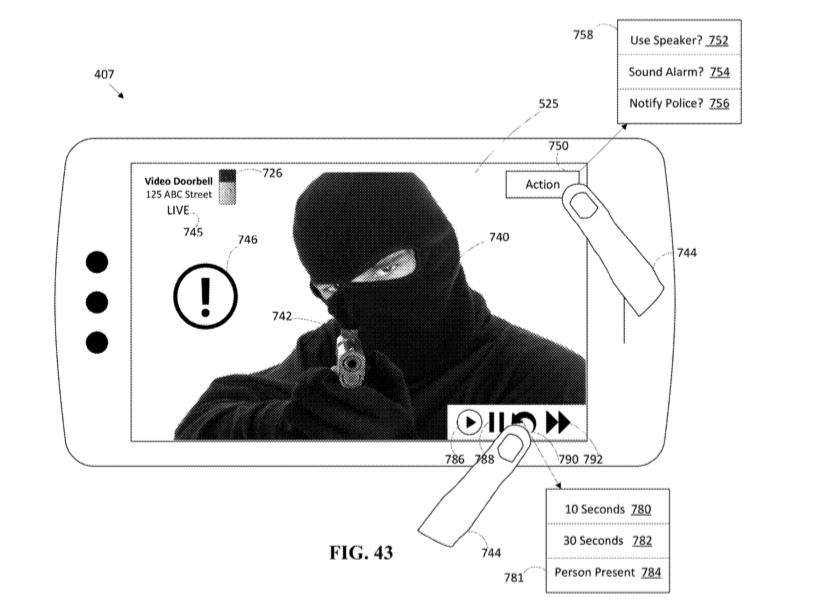 In the future, it’s possible that Ring will incorporate facial recognition into Amazon’s Ring/Neighbors ecosystem. Ring filed patents made public in December 2018 which indicate a desire to use facial recognition technology to compare subjects on camera with members of a “database of suspicious persons.”

Facial recognition is disproportionately less accurate at identifying people of color, especially women of color. Rekognition, Amazon’s facial recognition software, misidentified 28 Congressional portraits with mugshots in 2018, according to a test conducted by the ACLU. The false matches were disproportionately Congresspeople of color. A Ring spokesperson told Motherboard that “this patent certainly does not imply implementation,” but did not say that the technology described in the patent would never be implemented.

“I can’t stress enough that the idea that a more surveilled society is safer is really predicated the notion of who that kind of surveillance tends to favor—not already marginalized people,” Gilliard told Motherboard. “Whether that is a black or brown person taking a jog or walk through the neighborhood, or a delivery person, or somebody checking the meter.”