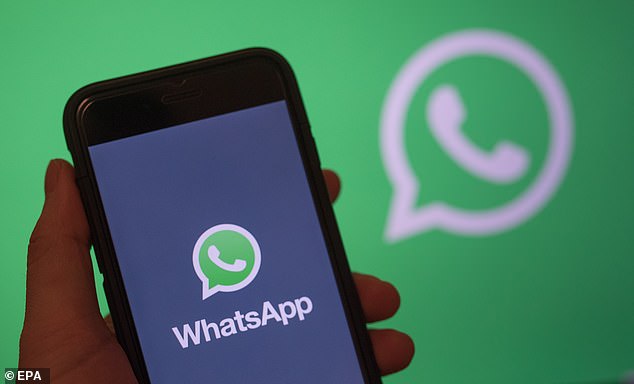 WhatsApp is limiting users from sending the same message to more than five people or groups in its latest move to crack down on the spread of misinformation on its platform.

Before the new policy, users could forward messages up to 20 times.

Last July, the Facebook-owned social media app began limiting message forwarding to up to five times for users in India, but now the policy is expanding globally.

The company said the move was initiated to fight 'misinformation and rumors.'

'We’re imposing a limit of five messages all over the world as of today,' Victoria Grand, vice president for policy and communications at WhatsApp, said at an event in the Indonesian capital.

WhatsApp said it made the decision to expand the limit globally after examining the results of the test in India.

Forwarding limits were put into place in India after the spread of rumors on social media led to killings and lynching attempts.

WhatsApp, which has around 1.5 billion users, has been trying to find ways to stop misuse of the app, following global concern that the platform was being used to spread fake news, manipulated photos, videos without context, and audio hoaxes, with no way to monitor their origin or full reach.

The app’s end-to-end encryption allows groups of hundreds of users to exchange texts, photos and video beyond the purview of independent fact checkers or even the platform itself.

Android users will receive the update first, followed by users of Apple’s iOS.

The company told the BBC that the new change will help the app remain a place for one-to-one communication.

We'll continue to listen to user feedback about their experience, and over time, look for new ways of addressing viral content.'

It comes as WhatsApp's parent company, Facebook, is also facing renewed scrutiny for its role in spreading misinformation.

In response, Facebook has doubled down on its efforts to stave off fake news, removing hundreds of pages and accounts from its website believed to be linked to coordinated disinformation campaigns.

WHY IS WHATSAPP INVOLVED IN A LYNCHING SCANDAL IN INDIA?

A horrific spate of lynchings led to WhatsApp announcing limits on the forwarding of messages by its 200 million Indian users in July, 2018.

More than 20 people accused of child kidnapping and other crimes in viral messages spread via the app were butchered by mobs in the preceding two months.

In India people forward on WhatsApp more messages, photos, and videos, than any other country in the world, the company says.

One incident saw a 27-year-old software engineer beaten to death by a crowd of more than 2,000 people in the southern state of Karnataka after he and his friends offered chocolates to local children.

Police arrested more than 48 people they said were part of a mob that killed the tech industry worker in southern India over suspicions that he and a group of friends were child abductors.

Fatal attacks have also been carried out on Muslims by 'cow protection' groups roaming highways and inspecting livestock trucks. Cows are sacred to the majority Hindu community.

Indian authorities did launch awareness campaigns and patrols and imposed internet blackouts in some areas but the impact was limited.

One official 'rumour buster' was himself beaten to death in the north-east in June.