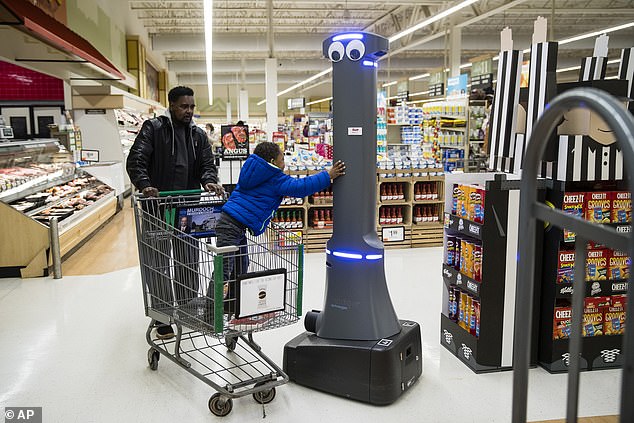 A wheeled robot named Marty is rolling into nearly 500 grocery stores to alert employees if it encounters spilled granola, squashed tomatoes or a broken jar of mayonnaise.

But there could be a human watching from behind its cartoonish googly eyes.

But to make sure, humans working in a control center in the Philippines review the imagery before triggering a cleanup message over the loudspeaker.

Rowland says 25 of the robots are now operating at certain Giant, Martin's and Stop & Shop stores, with 30 more arriving each week.

Carlisle, Pennsylvania-based Giant says it has two robots now working at stores in the state, and plans to expand to all 172 Giant stores by the middle of this year.

The chains are all part of Dutch parent company Ahold Delhaize.

The robots move around using laser-based 'lidar' sensors and pause when shoppers and their carts veer into their path.

The googly eyes are fake, but each robot has eight cameras - some directed down at the floor and others that can see shelves.

Rowland said the robots can eventually be repurposed to help monitor a store's inventory.

A robot observed Tuesday at a Stop & Shop store in Seekonk, Massachusetts, alerted store associates to a price tag that had fallen in one aisle, and a tiny sprig of herbs in another.

After moving along for a few minutes, it returned to the scene of each spill and waited until an employee pushed a button to acknowledge that the debris was picked up.

It's not the only robot that U.S. shoppers might spot this year. Walmart and Midwestern supermarket chain Schnucks have deployed robots that help monitor inventory.

A union that represents Giant and Stop & Shop workers says it's keeping an eye on Marty. 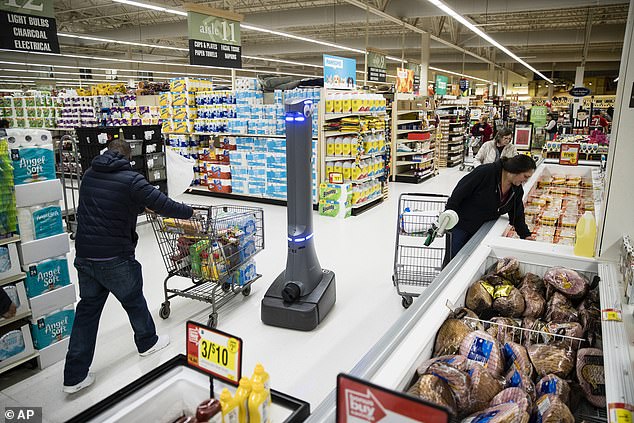 It remains to be seen what the groceries will ultimately use the technology for.

UFCW President Marc Perrone said in an emailed statement that the 'aggressive expansion of automation in grocery and retail stores is a direct threat to the millions of American workers who power these industries and the customers they serve.'

'Bringing robotics and A.I. from a research lab to the sales floor has been a very exciting journey, and we were thrilled by the customer response in our pilot stores,' said Nicholas Bertram, president, GIANT Food Stores.

'Our associates have worked hard to bring this innovation to life with amazing partners.'