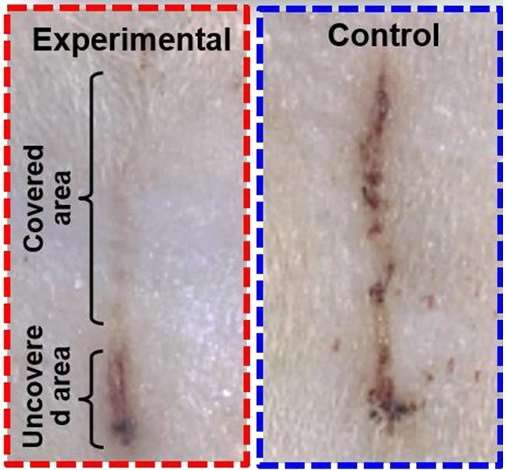 Skin has a remarkable ability to heal itself. But in some cases, wounds heal very slowly or not at all, putting a person at risk for chronic pain, infection and scarring. Now, researchers have developed a self-powered bandage that generates an electric field over an injury, dramatically reducing the healing time for skin wounds in rats. They report their results in ACS Nano.

Chronic skin wounds include diabetic foot ulcers, venous ulcers and non-healing surgical wounds. Doctors have tried various approaches to help chronic wounds heal, including bandaging, dressing, exposure to oxygen and growth-factor therapy, but they often show limited effectiveness. As early as the 1960s, researchers observed that electrical stimulation could help skin wounds heal. However, the equipment for generating the electric field is often large and may require patient hospitalization. Weibo Cai, Xudong Wang and colleagues wanted to develop a flexible, self-powered bandage that could convert skin movements into a therapeutic electric field.

To power their electric bandage, or e-bandage, the researchers made a wearable nanogenerator by overlapping sheets of polytetrafluoroethylene (PTFE), copper foil and polyethylene terephthalate (PET). The nanogenerator converted skin movements, which occur during normal activity or even breathing, into small electrical pulses. This current flowed to two working electrodes that were placed on either side of the skin wound to produce a weak electric field. The team tested the device by placing it over wounds on rats' backs. Wounds covered by e-bandages closed within 3 days, compared with 12 days for a control bandage with no electric field. The researchers attribute the faster wound healing to enhanced fibroblast migration, proliferation and differentiation induced by the electric field.

The reign of flesh-colored Band-Aids may soon be disrupted. Researchers have revealed a new high-tech competitor that might just revolutionize the healing industry: a self-powered bandage that generates an electric field over a boo-boo.

According to a new report in ScienceDaily, engineers at the University of Wisconsin-Madison created a new kind of protective bandage that sends a mild electrical stimulation, thereby “dramatically” reducing the time a rat’s wound takes to heal. The technology could be especially useful for people who suffer from chronic wounds, such as diabetic foot ulcers, venous ulcers, and non-healing surgical wounds. Often, these kind of wounds don’t respond well to general bandaging procedures.

This new electric bandage is powered a by wearable nanogenerator constructed of overlapping sheets of polytetrafluoroethylene (PTFE), copper foil, and polyethylene terephthalate (PET). The nanogenerator converts skin movements into small electrical pulses, which then flow to two working electrodes placed on either side of the wound to produce a weak electric field. Basically, energy generated by a patient’s body fuels the electrical pulses.

“Our device is as convenient as a bandage you put on your skin,” Xudong Wang, a professor of materials science and engineering at UW-Madison, told the university’s communications team.

The tests showed that such e-bandages heal wounds within three days, compared to 12 days with a normal control bandage.

“We were surprised to see such a fast recovery rate,” said Wang. “We suspected that the devices would produce some effect, but the magnitude was much more than we expected.”

Moving forward, the researchers intend to further study how the pulses affect healing with a study on pig skin, which closely resembles human tissue. They also want to further increase the nanogenerators’ capabilities, which may include new ways to harness energy, like utilizing small, imperceptible twitches in the skin or the pulse of a heartbeat.

The team believes their new invention could solve a medley of medical issues. And better yet, it’s relatively low-cost,  just a smidge more expensive than a regular bandage. “The device in itself is very simple and convenient to fabricate,” says Wang.