MIAMI — The American government employees in Cuba who suffered mystifying symptoms — dizziness, insomnia, difficulty concentrating — after hearing a strange high-pitched sound all had one thing in common: damage to the part of the inner ear responsible for balance, according to the first doctors to examine them after the episodes.

Two years after Americans posted at the United States Embassy in Havana began experiencing the peculiar phenomenon, doctors at the University of Miami on Wednesday published a scientific paper that confirms what these patients have said all along: Their condition is real, not the result of mass hysteria, a response to intense news media coverage or a stress reaction to being evacuated, as doctors in Cuba had suggested.

“These people were injured,” said Dr. Michael E. Hoffer, the director of the university’s Vestibular and Balance Program and lead author of the study. “We’re not sure how. The injury resulted in ear damage and some trouble thinking.”

To some of the 26 people affected, the episode felt like something out of “Star Trek”: A few minutes of a high-pitched noise, often accompanied by a high-pressure sensation, described as a “force field,” felt in their homes and hotel rooms in Cuba over several months starting in late 2016, changed their lives and, in some cases, ended careers.

The dizziness and cognitive problems that followed — including severe insomnia and nausea when using a computer — were so intense that at least one State Department employee went into early retirement this year. Another person who experienced a similar phenomenon in China went on leave. The State Department would not say how many people had returned to work.

Identifying the specific nature of the damage means that the patients could potentially be treated with physical therapy, the doctors said. It isn’t clear yet whether the injury is permanent.

The study, which also included work by a professor from the University of Pittsburgh and was published in the journal Laryngoscope Investigative Otolaryngology, is the first to document the earliest symptoms of a medical mystery that started in Cuba, damaging relations between that country and the United States, and may have spread to China.

Doctors found that all of the people affected by what was initially — and inaccurately — thought to be an acoustic attack had damage to the otolith, the organ that manages balance and the sensation of gravity.

The authors of the University of Miami study said it was the only one to document the medical examinations that took place soon after the sounds were heard, before news media reports or workers’ compensation claims could have affected results. The study does not offer any theory as to what caused the injuries, but Dr. Hoffer, who specializes in concussions, said he now felt confident that doctors can screen for the condition — and treat it.

He said the patients had described a “force field” sensation that they could physically feel. Some prolonged their exposure by walking around in search of the source. When they opened their front doors, it was gone, they told him. 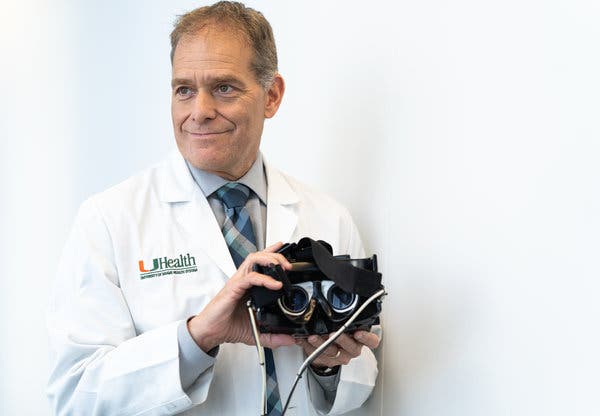 “Their theory is that they were targeted, because they were being followed and the other individuals in their household were in some cases not affected,” said Dr. Hoffer, a military veteran who still has security clearance.

The doctors examined 25 patients and 10 of their housemates, plus another 100 people based in Cuba who did not show symptoms. The patients were strapped to a rotating chair in a small, completely darkened room, while specialized goggles recorded their eye movements. The doctors then tested their sense of up and down.

After suffering the damage, the patients’ bodies spend so much energy trying to stay balanced that it wipes them out, he said.

“That’s very fatiguing,” Dr. Hoffer said. “And it doesn’t leave a lot left over to remember where you put your keys.”

Dr. Bonnie E. Levin, the director of neuropsychology at the University of Miami’s School of Medicine, examined a subset of the patients who had cognitive problems. The otherwise high-functioning people scored poorly on memory tests and exams that measured their ability to multitask and hear information against background noise, she said.

“Everybody that I saw was quite disabled,” she said, adding that they also had trouble regulating emotion.

An investigation by the F.B.I. and other government agencies has so far not determined what caused the illnesses.

More than a year after the episodes began, the Trump administration sent most of the embassy personnel home, leaving 18 people in Havana. Cubans who need visas to travel to the United States now have to go to Guyana to apply for them.

So far, 26 people posted in Havana have been identified with “otherwise-unexplained, medically-confirmed symptoms and clinical findings” since late 2016, the State Department said in a statement.

In May, one person at the United States Consulate in Guangzhou, China, was found to have symptoms similar to those seen in Cuba.

The government sent around 300 people posted in China for testing. Fifteen people needed further examinations, and one person had symptoms that required follow-up — although that case has not been officially linked to the same cause, the State Department said. 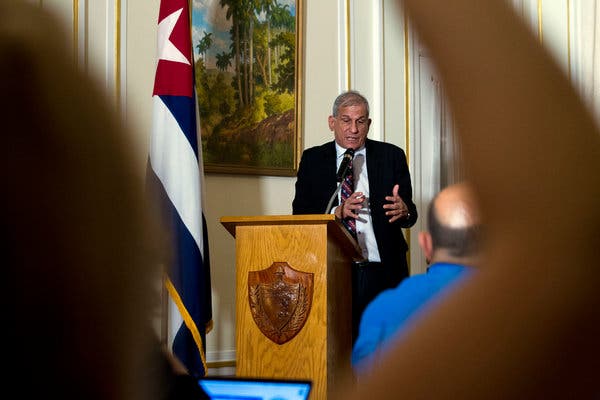 People affected have shown symptoms “similar to those noted following concussion or minor traumatic brain injury,” including dizziness, headaches, hearing loss, and balance, visual and cognitive problems, the statement said. “Given the seeming exclusive focus on U.S. government personnel and their families in Havana,” the State Department added, officials have “categorized the events in Havana as attacks. We cannot rule out that additional cases could come to light.”

Mark S. Zaid, a lawyer who is representing about 11 of the Americans, said the Trump administration had not been forthcoming about its findings, and seemed to resist the notion that the person in China was suffering from the same illness.

“I think they know far more than what they have revealed,” he said.

The going theory, he said, was that some kind of microwave-based weapon was to blame.

The University of Miami study said “it would be imprudent to exclude any potential directed or non-directed energy sources at this time.”

Carlos Fernández de Cossio, the director of the United States Department at the Cuban Foreign Ministry, said the United States government had not made the patients or their medical histories available to Cuban experts.

“The way in which the government of the United States has dealt with this matter of the supposed health damages is worrisome,” he told the Cuban state-run media. “They have tackled it from the beginning with a high dose of political manipulation.”

Informed of the study’s findings, Mr. Zaid said they confirmed what the patients were saying from the start.

“The key thing is that it appears testable,” he said.

He said none of his clients were feeling entirely better. One young woman recently took a leave of absence from work.

The woman who recently retired said that the study validated the embassy employees, who were not always taken seriously, particularly if they were older or female.

The woman, who did not want her name published for fear of retaliation by the culprits of the attacks, said she felt a bit better now that she no longer spends her days on a computer. When she tried working last year, she would last no more than an hour and a half before starting to feel nauseated.

Although she feels vertigo less frequently, she said her brain still does not function as it did before she heard the noise.

Mr. Zaid, who represents her, said the government needs to learn more about what happened and why. The study, he said, “is simply one piece of a puzzle, the final picture of which is still elusive.”