Facebook has admitted its $200 Portal device, which goes on sale today in the US, will monitor user activity to serve lucrative personalized ads to owners.

The firm claims it collects devise usage information to understand how Portal is being used and 'improve the product.'

It also admits that in the event the device crashes, 'small fragments of video and audio information that are less than one second in length' are sent to the firm.

Facebook has struggled to curb concerns that the Portal and the $349 Portal+ won't become surveillance devices - and some reviewers refused to review the device in their home due to privacy fears.

The Portals are equipped with speakers, microphones and an AI-infused, wide-angle camera that can follow users around the room and adjust the view accordingly.

What's more, many users are finding it hard to look past Facebook's recent privacy controversies, including the Cambridge Analytica scandal in March, which resulted in 87 million users' information being shared with a Trump-affiliated research firm without their knowledge.

Additionally, Facebook announced in September that it had been hit by its worst-ever data breach, with hackers gaining access to 50 million accounts.

Since then, the social media giant has been working to repair its relationship with its more than 2 billion users worldwide.

Now, Facebook is hoping to clarify just exactly what they can and cannot do inside your home.

'When you use Portal, we process the same kinds of information as when you use Facebook products on your other devices', a spokesperson wrote in a blog post.

'Some of this information, including the fact that you logged into your account or how often you use a feature or app, may be used to inform the ads you see across Facebook.

'While we don’t listen to, view or keep the contents of your Portal video calls, or use this information to target ads, we do process some device usage information to understand how Portal is being used and to improve the product', the firm said.

Facebook was said to be prepping a Portal chat device - which is currently not available in the UK - as far back as a year ago.

It reportedly put the release on hold after the Cambridge Analytica scandal unfolded.

The launch timing has been viewed by many as puzzling, given all of Facebook's recent data missteps.

Many remain skeptical about whether or not Facebook will truly handle Portal users data with care and whether there are enough safeguards in place should their be some kind of data breach similar to the one in September. 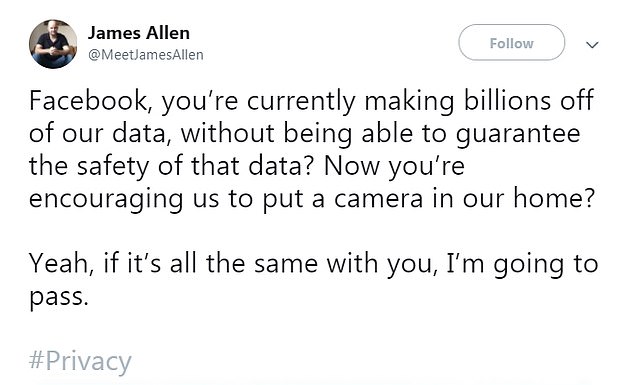 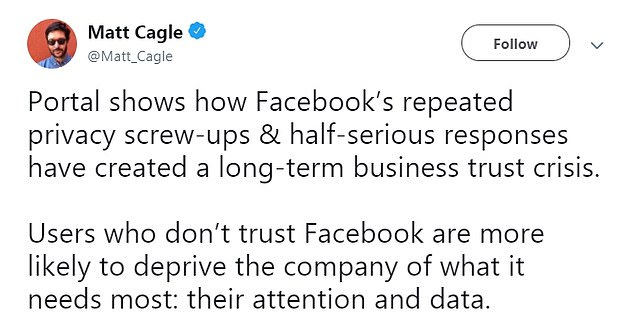 Andrew Bosworth, Facebook's vice president of consumer hardware, sought to clarify the products in several interviews ahead of their launch in the US on Thursday.

Portal uses Facebook Messenger to run video calling features, meaning it will collect similar data to the chat app, including how often users log on and who they talk to.

That information may be shared with advertisers in some cases, but for now, Facebook doesn't view the data collected from Portal devices as being very instrumental.

'Even if this was the most successful hardware product in history, that wouldn’t be significant compared to the people we already have using Messenger,' Bosworth told Bloomberg.

'This isn’t a data gathering operation.'

Facebook says the Smart Camera and Smart Sound uses AI technology that runs locally on Portal and is not on the Facebook servers.

This means Portal's camera does not identify who users are, the firm assured users.

The portals - which are Facebook's first foray into hardware - are also encrypted so calls are secure, the firm said in the statement. 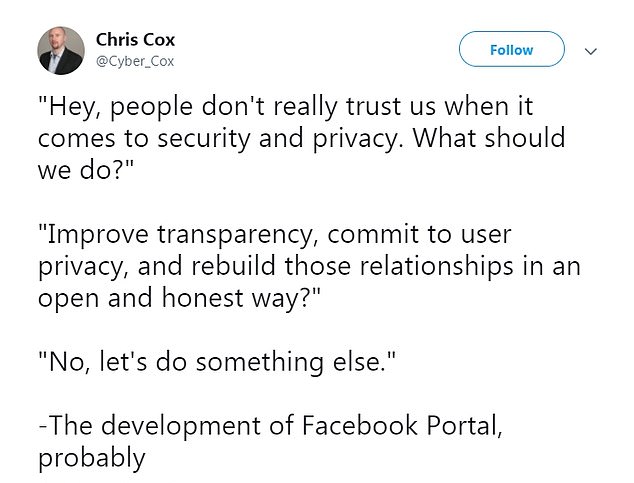 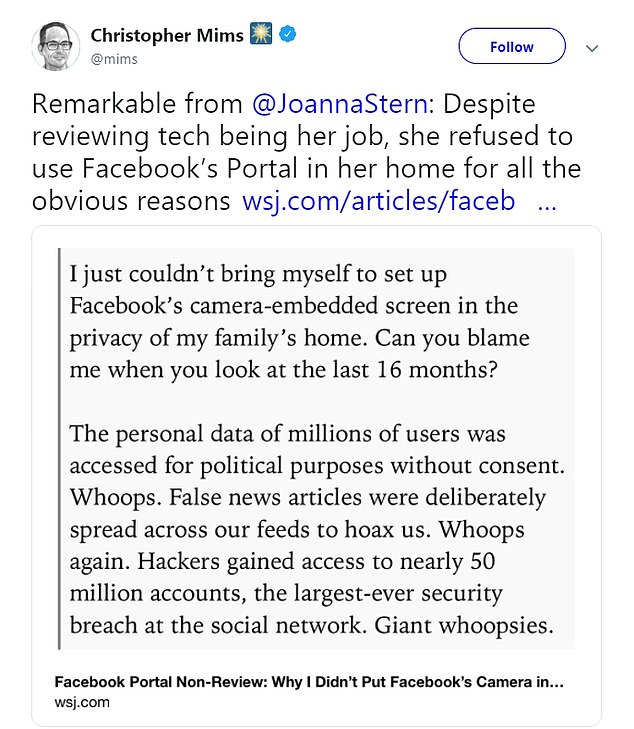 Users can switch between portrait and landscape mode on the Portal+ by swiveling the screen.

Both feature 12 megapixel cameras, as well as two front and rear microphones.

The devices use Facebook Messenger to make and receive calls.

They're also integrated with Amazon's Alexa voice assistant, which powers a wide range of apps, like Spotify and Pandora, along with standard commands like checking the weather, ordering groceries and more, just by saying 'Hey, Alexa.'

Confusingly, however, users can also say 'Hey, Portal,' to make a call.

The devices are equipped with a Bluetooth speaker, as well as a voice-activated speaker.

They can both pair with other Bluetooth speakers in the household to provide more dynamic sound.

Portal can also be used to play videos from places like Facebook Watch and the Food Network, as well as show reminders about birthdays on Facebook.

The firm says there are no Facebook adverts on Portal.

'However, you may see ads from some third-party apps on Portal (e.g., music partners) in the same way you’ll see ads from these services on other devices', a spokesperson said.

From the homescreen, Portal will suggest Messenger contacts you might want to call by tapping on their icon, but users can call anyone by saying 'Hey, Portal.'

Up to seven Portal users can take part in group chats.

The devices are part smart photo frame, part video chat device and are similar to smart display devices rolled out by Google or Amazon, such as the Echo Show.

Facebook designed them to be used from a distance of 5ft to 10ft, which is farther away than a typical webcam.

Using AI, the 140-degree 12 megapixel camera can adjust to whoever is being captured based on how they move around the room.

A feature called SmartCamera mode automatically reframes the image based on people who enter and leave the shot. When users move around the room, the camera will zoom out to make sure it captures both in the frame.

In Spotlight mode, Users can cap on a person in the frame and the camera will automatically zoom in on their face.

'Thanks to AI technology, Portal makes video calling easier and more like hanging out, while a widescreen display lets you enjoy every moment together,' Facebook explained in a blog post.

'When you can’t be there, Portal and Portal+ let you feel there.'

Portal uses several features from Facebook Messenger, such as augmented reality Masks that overlay bunny ears on your face or a cat on your head during a video call.

There's also a Storytime feature that lets parents read through popular children's books on screen, including the option to put AR Masks on their face, along with interactive animations that appear on the display.

Addressing what's quite possibly the elephant in the room, Facebook paid attention to privacy and security in rolling out the device.

Friends or family can't 'drop in' to your home whenever they want, such as the Echo Show's eponymous feature; instead, video chats have to be accepted before the camera turns on.

Facebook gives users the option to completely disable the camera and microphone capabilities on both devices.

Users can also set a four to 12-digit passcode on their device to keep the screen locked.

Portal and Portal+ are equipped with Amazon's Alexa, so they respond to voice commands.

Here's what they can do:

We know there are some questions around Portal privacy and ads, so we’d like to provide more details on these topics.

Facebook in late September disclosed that it had been hit by its worst ever data breach, affecting 50 million users - including those of Facebook boss Mark Zuckerberg and COO Sheryl Sandberg.

Attackers exploited the site's 'View As' feature, which lets people see what their profiles look like to other users.

The unknown attackers took advantage of a feature in the code called 'Access Tokens,' to take over people's accounts, potentially giving hackers access to private messages, photos and posts - although Facebook said there was no evidence that had been done.

Facebook made headlines earlier this year after the data of 87 million users was improperly accessed by Cambridge Analytica, a political consultancy.

The disclosure has prompted government inquiries into the company's privacy practices across the world, and fueled a '#deleteFacebook' movement among consumers.

The company boasts it can 'find your voters and move them to action' through data-driven campaigns and a team that includes data scientists and behavioural psychologists.

'Within the United States alone, we have played a pivotal role in winning presidential races as well as congressional and state elections,' with data on more than 230 million American voters, Cambridge Analytica claims on its website.

The company profited from a feature that meant apps could ask for permission to access your own data as well as the data of all your Facebook friends.