The US Drug Enforcement Administration (DEA) and Immigration and Customs Enforcement (ICE) have hidden an undisclosed number of covert surveillance cameras inside streetlights around the country, federal contracting documents reveal.

It’s unclear where the DEA and ICE streetlight cameras have been installed, or where the next deployments will take place. ICE offices in Dallas, Houston, and San Antonio have provided funding for recent acquisitions from Cowboy Streetlight Concealments; the DEA’s most recent purchases were funded by the agency’s Office of Investigative Technology, which is located in Lorton, Virginia. 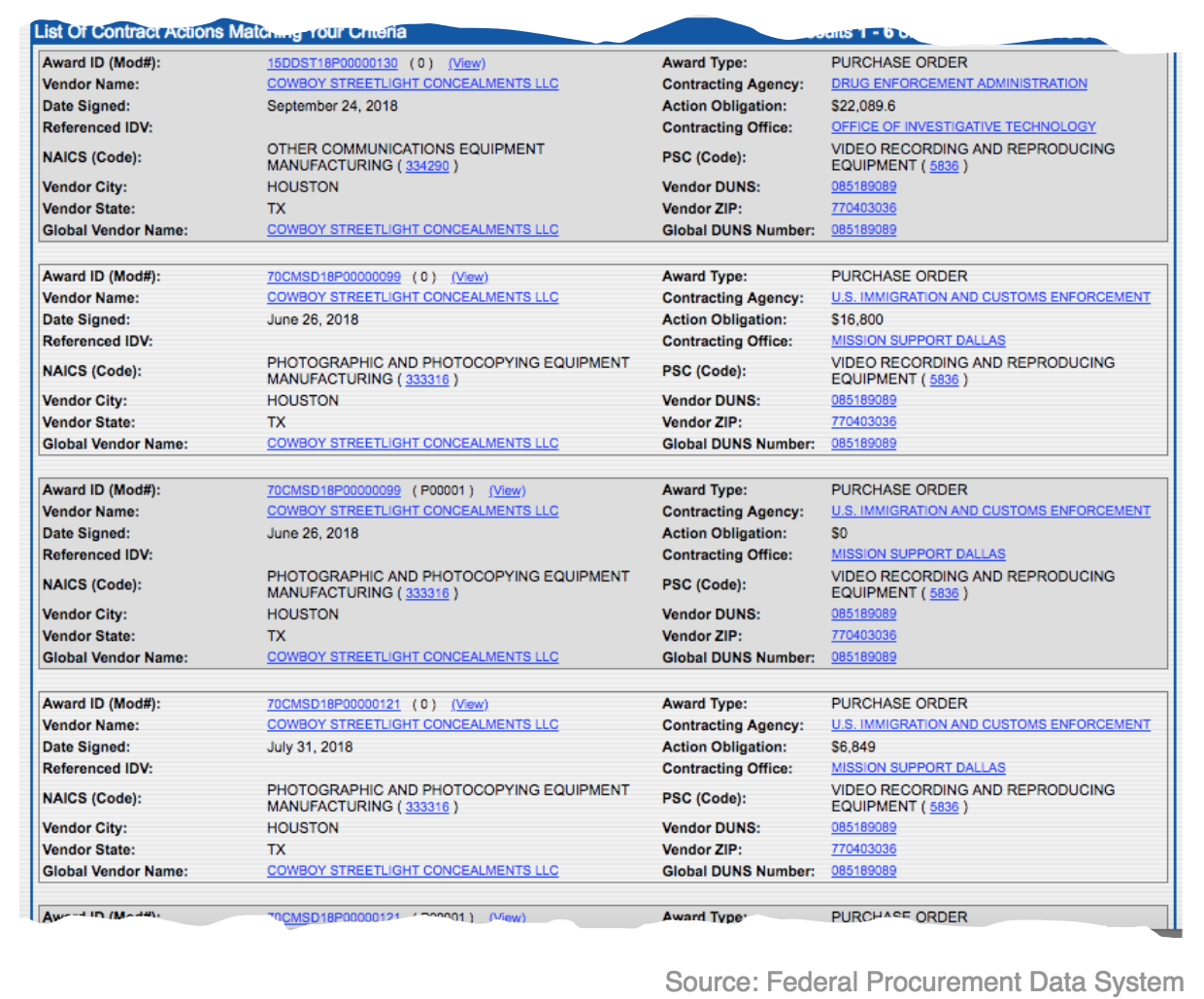 Christie Crawford, who owns Cowboy Streetlight Concealments with her husband, a Houston police officer, said she was not at liberty to discuss the company’s federal contracts in detail.

“We do streetlight concealments and camera enclosures,” Crawford told Quartz. “Basically, there’s businesses out there that will build concealments for the government and that’s what we do. They specify what’s best for them, and we make it. And that’s about all I can probably say.”

However, she added: “I can tell you this—things are always being watched. It doesn’t matter if you’re driving down the street or visiting a friend, if government or law enforcement has a reason to set up surveillance, there’s great technology out there to do it.”

Earlier this week, the DEA issued a solicitation for “concealments made to house network PTZ [Pan-Tilt-Zoom] camera, cellular modem, cellular compression device,” noting that the government intended to give the contract to Obsidian Integration LLC, an Oregon company with a sizable number of federal law enforcement customers.

On November 7, the Jersey City Police Department awarded a contract to Obsidian Integration for “the purchase and delivery of a covert pole camera.” The filing did not provide further design details.

Obsidian did not respond to a request for comment, nor did Morgan Hairston, the Department of Justice contracting officer handling the bids.

In addition to streetlights, the DEA has also placed covert surveillance cameras inside traffic barrels, a purpose-built product offered by a number of manufacturers. And as Quartz reported last month, the DEA operates a network of digital speed-display road signs that contain automated license plate reader technology within them. 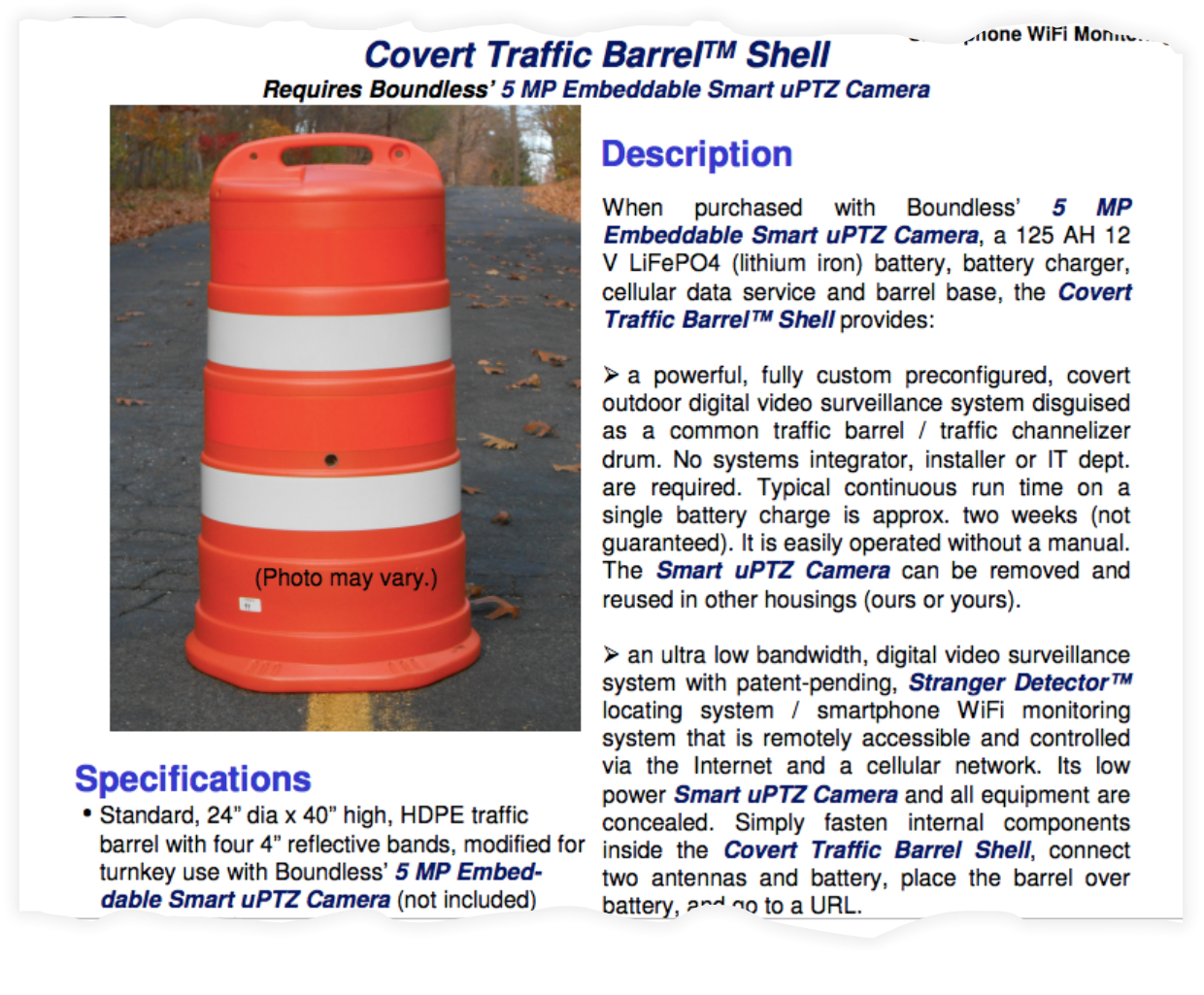 Chad Marlow, a senior advocacy and policy counsel for the American Civil Liberties Union, says efforts to put cameras in street lights have been proposed before by local law enforcement, typically as part of a “smart” LED street light system.

“It basically has the ability to turn every streetlight into a surveillance device, which is very Orwellian to say the least,” Marlow told Quartz. “In most jurisdictions, the local police or department of public works are authorized to make these decisions unilaterally and in secret. There’s no public debate or oversight.”

The impact of surveillance cameras will increase as the development of facial recognition algorithms become more commonplace among law enforcement agencies. Amazon has been particularly interested in outfitting cameras operated by the US Department of Homeland Security (DHS) with facial recognition, according to emails recently unearthed by the Project on Government Oversight.

“We are ready and willing to support the vital [Homeland Security Investigations] mission,” an Amazon employee wrote in an email that touted the company’s facial recognition software.