The social media giant said attackers exploited the site's 'View As' feature, which lets people see what their profiles look like to other users.

The unknown attackers took advantage of a feature in the code called 'Access Tokens,' to take over people's accounts, potentially giving hackers access to private messages, photos and posts - although Facebook said there was no evidence that had been done.

The attack marks the latest in a string of recent setbacks for Facebook, which is still recovering from the fallout over the Cambridge Analytica scandal earlier this year, which saw some 87 million users' data shared with the research firm without their knowledge.

As a result, some experts and officials have grown concerned about whether the firm can effectively manage and protect users' data.

'The implications of this are huge,' Justin Fier, director of cyber intelligence at security company Darktrace, told Reuters.

Facebook said it hasinformed the Irish Data Protection Commission about the breach, a step required by Europe's GDPR regulations.

The commission said it received the notification, but expressed concern with its timing and lack of detail.

'...Today's disclosure is a reminder about the dangers posed when a small number of companies like Facebook or the credit bureau Equifax are able to accumulate so much personal data about individual Americans without adequate security measures.

'This is another sobering indicator that Congress needs to step up and take action to protect the privacy and security of social media users. As I've said before - the era of the Wild West in social media is over,' he added.

Not long after the breach was announced, some Twitter users also began reporting that Facebook was blocking them from sharing links to stories about the hack from the Associated Press and The Guardian.

When users attempted to share the links, they were served a message that read: 'Our security systems have detected that a lot of people are posting the same content, which could mean that it's spam. Please try a different post.'

Friday's announcement sent Facebook's stock plunging by as much as 3.4 percent in afternoon trading, adding to an already rough year for Facebook shares, which have fallen 6.7 percent so far this year. 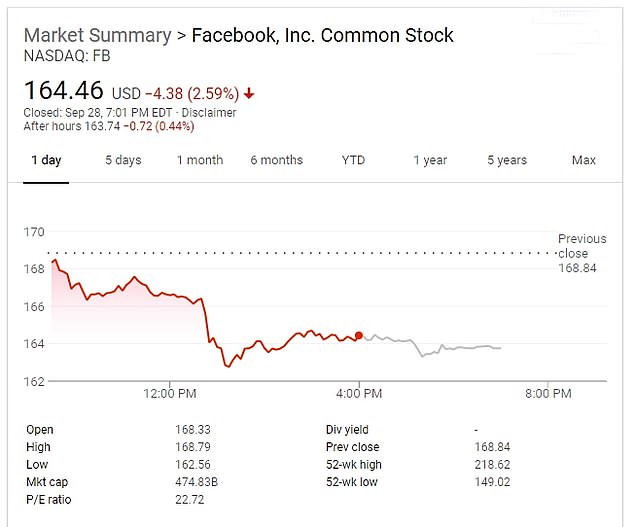 Zuckerberg penned a post on his personal Facebook page about the incident, saying the issue was 'patched last night' but that the firm is working with law enforcement, including the FBI, to investigate the origins of the attack.

'On Tuesday, we discovered that an attacker exploited a technical vulnerability to steal access tokens that would allow them to log into about 50 million people's accounts on Facebook,' Zuckerberg wrote.

Our security systems have detected that a lot of people are posting the same content, which could mean that it's spam,' the notice said. 'Please try a different post.'

Zuckerberg acknowledged in a statement to reporters that Facebook needs to take additional steps to prevent these kinds of issues from occurring in the future.

'We're taking it really seriously...We have a major security effort at the company that hardens all of our surfaces,' Zuckerberg said in a call with reporters.

'I'm glad we found this. But it definitely is an issue that this happened in the first place.'

Facebook doesn't know whether the accounts were misused, and hasn't yet found any evidence of them being misused.

However, speaking with reporters, Zuckerberg said 'of course that may change,' meaning that there's a possibility they could find evidence of misuse upon further investigation into the incident.

Facebook said it's now working with the FBI to further investigate the incident.

'The vulnerability itself was the result of three distinct bugs and the integration between them and it was introduced July 2017 through a video uploader,' Rosen said on the call with reporters.

'The attack did try to use the API to access profile information like name or gender,' Rosen said.

However, Rosen emphasized that the breach let attackers operate the profile as if they were the user.

While users' credit card information and passwords may not have been accessed, there's still the possibility that other sensitive information was, said Simon Migliano, head of research and cybersecurity expert at the online privacy website Top10VPN.com.

'Even if these accounts were quickly disabled, or login details changed, at the very least the hackers will have got their hands on primary email addresses,' Migliano explained.

'To get hacked once is careless, to get hacked again is frankly unforgivable, and this could irrevocably damage the trust users have in Facebook.

'Who is ever going to believe them again when they say they have fixed the problem. It just feels like one excuse after another,' Migliano added.

The firm learned of the incident on Tuesday and notified law enforcement on Wednesday. By Thursday, the firm had patched the vulnerability and started resetting access codes.

'We're also taking the precautionary step of resetting access tokens for another 40 million accounts that have been subject to a 'View As' look-up in the last year,' Rosen wrote in a separate blog post.

'After they have logged back in, people will get a notification at the top of their News Feed explaining what happened.

Affected users are prompted to log back in Facebook when they try and access the site. They'll then be sent an authentication code to an email address or mobile device. 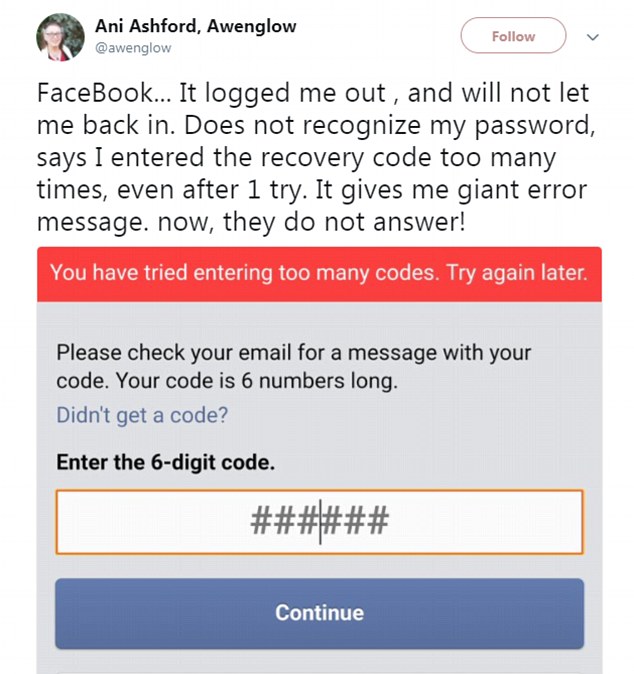 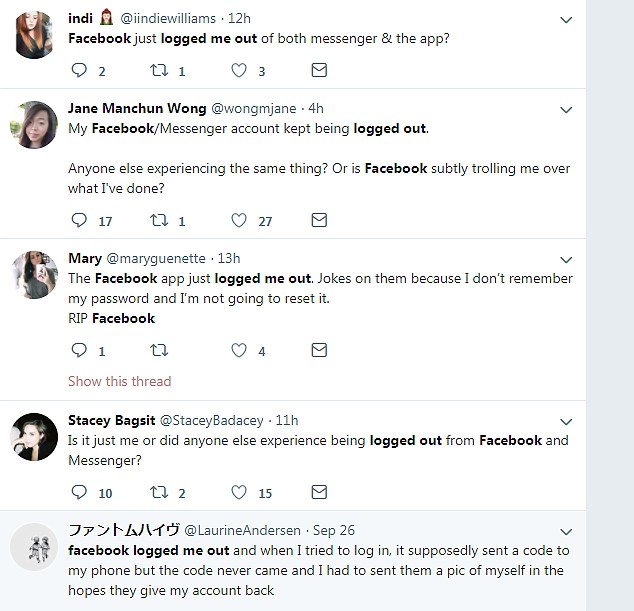 'Since we've only just started our investigation, we have yet to determine whether these accounts were misused or any information accessed,' Rosen explained.

'We also don't know who's behind these attacks or where they're based. We're working hard to better understand these details — and we will update this post when we have more information, or if the facts change.

'In addition, if we find more affected accounts, we will immediately reset their access tokens,' he added.

READ THE FULL STATEMENT FROM MARK ZUCKERBERG ON THE DATA BREACH

I want to update you on an important security issue we've identified. We patched the issue last night and are taking precautionary measures for those who might have been affected. We're still investigating, but I want to share what we've already found:

On Tuesday, we discovered that an attacker exploited a technical vulnerability to steal access tokens that would allow them to log into about 50 million people's accounts on Facebook.

We do not yet know whether these accounts were misused but we are continuing to look into this and will update when we learn more.

We've already taken a number of steps to address this issue:

1. We patched the security vulnerability to prevent this attacker or any other from being able to steal additional access tokens. And we invalidated the access tokens for the accounts of the 50 million people who were affected – causing them to be logged out. These people will have to log back in to access their accounts again. We will also notify these people in a message on top of their News Feed about what happened when they log back in.

2. As a precautionary measure, even though we believe we've fixed the issue, we're temporarily taking down the feature that had the security vulnerability until we can fully investigate it and make sure there are no other security issues with it. The feature is called 'View As' and it's a privacy tool to let you see how your own profile would look to other people.

3. As an additional precautionary measure, we're also logging out everyone who used the View As feature since the vulnerability was introduced. This will require another 40 million people or more to log back into their accounts. We do not currently have any evidence that suggests these accounts have been compromised, but we're taking this step as a precautionary measure.

We face constant attacks from people who want to take over accounts or steal information around the world. While I'm glad we found this, fixed the vulnerability, and secured the accounts that may be at risk, the reality is we need to continue developing new tools to prevent this from happening in the first place. If you've forgotten your password or are having trouble logging in, you can access your account through the @Help Center.

There's more detail in Guy's post below, and we'll update you as our investigation continues.