Work related to the deal will be carried out in Grand Prairie, TX, and is expected to be completed by Jul 1, 2022. Lockheed Martin will utilize fiscal 2018 other procurement and Army funds for completing the task.

A Brief Note on HIMARS

The HIMARS is the newest member in the multiple-launch rocket system (MLRS) family. It enables troops in engaging and defeating artillery, and air defense concentrations.

The rocket system carries a six-pack of GMLRS rockets or one TACMS missile, and is designed to launch the entire MLRS family of munitions. Additionally, it simplifies coalition operations, training, logistics and military coordination.

In recent times, the importance of missile defense systems in the U.S. aerospace-defense market has gained significant traction due to advancements and integration of new tactical features, followed by improved markets for cruise missiles, ballistic missiles, air to air missile, directed energy weapons and anti-satellite weapons. With Lockheed Martin being a prominent missile developer and Pentagon's largest defense contractor, growing demand for missiles has been resulting in a significantly higher inflow of contracts for the company.

This, in turn, boosts the company's Missiles and Fire Control (MFC) segment's top line. Evidently the MFC unit recorded strong revenue growth of 16.9% in the second quarter of 2018. We can, thus, expect this business segment to generate similar top-line growth in days ahead, based on consistent order flows from Pentagon, like the latest one.

Per ASD Media BV, the global Missiles and Missile Defense Systems (MMDS) market value is projected to see a CAGR of 6% to $93 billion by 2027 from 2018. Such growth can be attributed to heavy and frequent investments made by countries like the United States, China, Russia and Israel in the development of next-generation missiles and missile defense systems along with the large scale procurement made by countries like Saudi Arabia, India, Japan and South Korea.

These developments and technical advancements will further lead to the increasing demand for missiles, spare parts and technical services, thereby, boosting growth prospects of defense contractors like Lockheed Martin in this market.

Lockheed Martin's stock has improved about only 10% in the last year compared with the industry 's growth of 22.4%. The underperformance may have been caused by the intense competition that the company faces in the aerospace-defense space for its broad portfolio of products and services, both domestically as well as internationally. 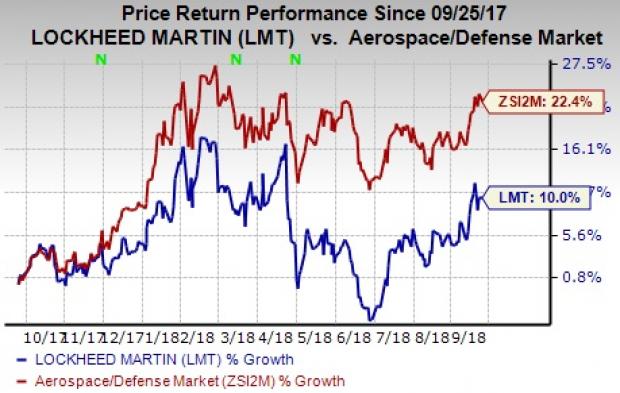 Aerojet Rocketdyne came up with an average positive earnings surprise of 9.27% in the last four quarters. The Zacks Consensus Estimate for 2018 earnings has risen 30.9% to $1.27 in the last 90 days.

Engility delivered an average positive earnings surprise of 19% in the last four quarters. The Zacks Consensus Estimate for 2018 earnings has moved up 16.1% to $2.02 in the last 90 days.

Huntington Ingalls pulled off an average positive earnings surprise of 9.48% for the trailing four quarters. The Zacks Consensus Estimate for 2018 earnings has moved 6.4% north to $17.24 in the last 90 days.

More Stock News: This Is Bigger than the iPhone!

It could become the mother of all technological revolutions. Apple sold a mere 1 billion iPhones in 10 years but a new breakthrough is expected to generate more than 27 billion devices in just 3 years, creating a $1.7 trillion market.

Zacks has just released a Special Report that spotlights this fast-emerging phenomenon and 6 tickers for taking advantage of it. If you don't buy now, you may kick yourself in 2020.