US Army researchers are developing 'everlasting' drones that can stay patrolling the skies indefinitely.

Instead of returning to base to recharge their batteries, a laser system could simply 'beam' power to them.

The US Army’s Communications-Electronics Research, Development and Engineering Center based in Maryland is developing the system, which combines lasers and photovoltaic cells.

The project would be away to power drones up to 500m away, allowing patrol drones to stay in the sky indefinitely.

The system works by firing a laser at the drone’s photovoltaic cell, which then converts the light into electricity in the same way a solar power panel does.

Several private firms are also developing power systems based on the same principle, including PowerLight.

Its system can also track and charges the UAV while it is in the sky.

'Free-Space Power Beaming technology is here today, and it is safe,' the firm says.

'It powers the UAV while it is in motion and at altitude. The PowerLight platform also incorporates a virtual shield of safety that ensures the people and environment above, below and nearby remain safe. 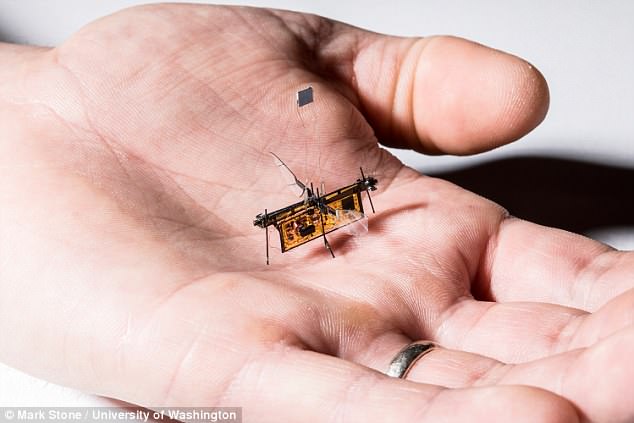 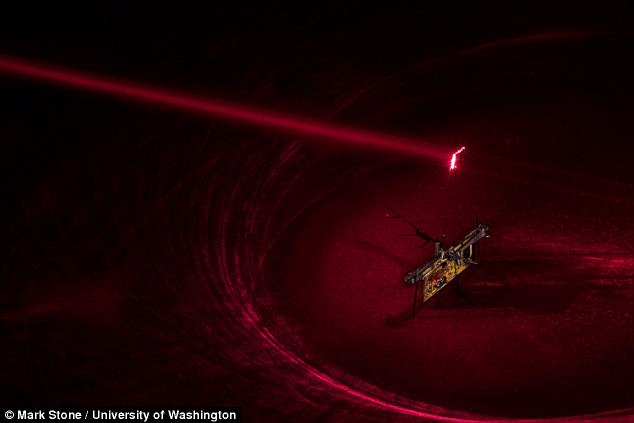 “The major challenge we see is thermal management,” says

William Rowley, who works on the US military project, told New Scientist the biggest hurdle facing the project is heat, which could cause melting or burning.

The project aims to demonstrate a working ground-to-ground system in early 2019 with ground-to-air following in 2020.

Engineers at the University of Washington are also working on a system for a tiny drone called RoboFly.

Previously, the electronics the insects carried to power and control their wings were too heavy for the robots to fly with, meaning they had to remain connected to a wire.

RoboFly is only slightly heavier than a toothpick and is powered by an onboard circuit that converts the laser energy into enough electricity to operate its wings.

'Before now, the concept of wireless insect-sized flying robots was science fiction. Would we ever be able to make them work without needing a wire?' said co-author Sawyer Fuller, an assistant professor in the UW Department of Mechanical Engineering.

'Our new wireless RoboFly shows they're much closer to real life.'

It uses a narrow invisible laser beam to power their robot.

They pointed the laser beam at a photovoltaic cell, which is attached above RoboFly and converts the laser light into electricity.

'It was the most efficient way to quickly transmit a lot of power to RoboFly without adding much weight,' said co-author Shyam Gollakota, an associate professor in the UW's Paul G. Allen School of Computer Science & Engineering.